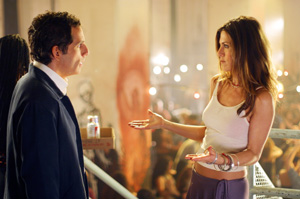 There are two types of Ben Stiller fans: those who discovered the comic through his TV program The Ben Stiller Show, which aired in 1990 on MTV and in 1992 on HBO, and those who first caught up with him in There’s Something About Mary. These two fan bases have divergent tastes. The MTV and Reality Bites crowd wonders when Stiller will segue back into the manic, borderline-subversive comedy of his earlier days (Zoolander came awfully close on that point), and the latecomers crave the next Meet the Parents outing. For the record, I fall in the first camp: The Ben Stiller Show featured some of the most bizarre comic turns since Ernie Kovacs hit a tree. Along Came Polly, however, is a film for the rest of the world, for those who thought having a character named Gaylord Focker (in Meet the Parents) was the living end. Stiller plays risk-assessment manager Reuben Feffer, who discovers his bride Lisa (Messing) in bed with their French scuba instructor (Azaria, in a fine, throwaway role) while on their island honeymoon. Shattered, he returns home to New York City alone, and, on the advice of pal Sandy Lyle (Hoffman), a former child star with visions of future glory, begins the arduous process of the thirtysomething dating game. It’s not long before Polly Prince (Aniston) comes along. A grade-school friend ("She was a mathlete!" crows Reuben) who has since morphed into a bangle-and-denim wearing East Village neo-hippie, Polly embarks on a whirlwind relationship with Reuben that’s notable for its tentative nature. While he struggles to impress her by eating in ethnic restaurants guaranteed to inflame his irritable bowel syndrome, she answers his every question with the sort of "Yeah, yeah, no" nonreply that’s been the flaky hallmark of Friends co-star Lisa Kudrow’s Phoebe since day one, and before that was Diane Keaton’s raison d’être in Annie Hall. Polly, having bounced around the globe from "Austin to Portland" and every other slacker haven in between, has developed a remarkable knack for avoiding commitment (and picked up an aging, blind ferret named Rolopho in the process), while Reuben has grown in exactly the opposite direction. How these two opposites will finally attract is at the heart of Along Came Polly, and it’s surely no secret that in the end their divergent paths will, indeed, intertwine. For all of Stiller’s pained mugging and the endless IBS gags, Along Came Polly is nonetheless something of a snooze; when Reuben’s wife, Lisa, finally reappears, as you suspected she might, it doesn’t take a devoted Dr. Phil fan to surmise who’s going to end up with whom come the closing credits. As a comic rumination on the risks inherent in modern relationships, the film, also written by Hamburg (who penned both Zoolander and Meet the Parents), takes zero risks of its own, although Stiller is almost always a pleasure to watch – he and Aniston develop some real chemistry here. Along Came Polly is ultimately, like its protagonist, too cautious for its own good. Even the usually explosive Hoffman seems to be just skimming over the surface of the story here, a sure sign that this is barely registering Stiller-lite.