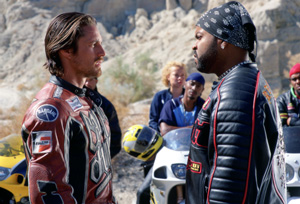 To its credit, Torque rockets by at a brief 81 minutes, a fitting running time for a film that sometimes seems to be a video game on steroids. Debuting director Joseph Kahn, who arrives here from the realm of music videos, has the visual and editing chops to make this motorcycle fetishist’s orgy a passable entertainment that’s rarely as wearying as the recent 2 Fast 2 Furious, which felt so over the top that it might as well have been science fiction. It helps that Torque’s leading man, New Zealander Martin Henderson (The Ring) displays the same sort of laconic, easy charm that a young Paul Newman once had. Compared to the bricklike acting of 2 Fast 2 Furious star Paul Walker, Henderson is James Dean; he delivers his wry, supremely cool lines with something approaching genuine talent, and although Torque is more fantasy than reality, Henderson’s Cary Ford is the sort of outlaw good guy who’s more interesting than annoying. That’s not to say that Torque is likely to be winning any awards outside of the motorhead-mag set. Matt Johnson’s script has Ford – a gangly, hot-tempered biker – returning to California from a self-imposed exile in Thailand, where he fled after stealing a pair of motorcycles owned by rival biker-cum-drug runner Henry (Schulze). The bikes have their gas tanks filled with methamphetamine, and to escape the feds that Henry sent his way, Ford keeps a low profile. Once back in Cali, he reunites with true love Shane (Mazur), a greasemonkey with a heart of gold and the sort of lo-rise leathers-and-thong combo that makes most men’s eyeballs explode at 20 paces. With buddies Dalton (Hernandez) and Val (Yun-Lee) at his side, Ford plots to outwit not only Henry but a pair of archly ridiculous FBI agents and Ice Cube’s Trey, the leader of a rival band of bikers who believe Ford is responsible for the murder of Trey’s little brother. Chaos, oddly enough, ensues. Torque is silly, goofball fun, the sort of picture Roger Corman’s New World would have turned out in the mid Seventies if they’d had the wherewithal to wreck this many $15,000 motorcycles. (It’s nowhere near as much fun as, say, Eat My Dust!, or even Grand Theft Auto, but it tries harder than most.) Kahn plays up the ridiculousness of the situation as often as possible: Outsized biker babes in undersized clothes soap gleaming chrome with all the lusty eroticism of a Dark brothers porn epic, and the cartoonish villainy going on behind the scenes is just one curled moustache hair past that of Snidely Whiplash. And then there’s Jaime Pressly as evil biker moll China: She may have only one or two lines in the entire film, but her climactic catfight battle royale with Mazur – a sort of dueling-motorcycle ballet in which the pair leap, cavort, and spin atop their rides while beating the stuffing out of each other – is so sublimely impossible it’s worth the price of admission by itself (that and the fact that Pressly’s tongue makes more of an impression than most of the cast). Torque knows it’s one big joke, dusty chaps, heaving bosoms, and all, which makes it all that much easier to swallow. And forget. 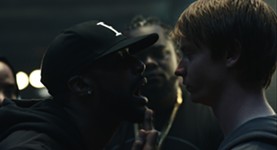