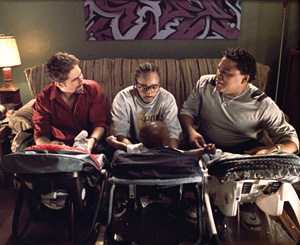 My Baby’s Daddy takes an admirable premise – three best friends and lifelong bachelors go from boys to men when they become fathers – and undermines that message at every turn with its reliance always on the vulgar, the obvious, and the shrill. A cutesy cartoon prologue introduces the three friends: G (Anderson), a wannabe boxer who works at his girlfriend’s father’s Duck Philly Steak shop; Dominic (Imperioli), a record producer and self-described player; and Lonnie (Griffin), who co-wrote the script), a failed inventor alternately ignored and abused by his longtime love. All three friends manage to impregnate their girlfriends on the same night (ironic, considering there’s a condom dispenser in the hallway, just a drunken stumble from each of their bedrooms), and each must then chart his own predictable course from lousy dad to loving dad. My Baby’s Daddy is but a slight variation on Three Men and a Baby, with the addition of two more tykes, a racially mixed cast, and a perverse insistence upon tastelessness and caricature. Though the three leads are all likable performers, their lunkheaded characters are as thinly drawn as their cartoon counterparts, and the supporting cast is littered with one racial stereotype after another. (Taking the cake is the depiction of G’s girlfriend’s father, whose name is Cha-Ching.) The merciless stereotyping, ranging from money-grubbing Asians to gangsta ho's, is all the more bewildering considering the director: Cheryl Dunye is a black lesbian filmmaker whose well-received 1996 indie film, The Watermelon Woman, was described by one critic as Go Fish meets She’s Gotta Have It. Perhaps this is stereotyping of my own, but I would expect a little more sensitivity from a director with that kind of pedigree. My Baby’s Daddy has the occasional inspired moment – the condom machine is replaced with a diaper dispenser, and a tongue-in-cheek strut (set to Scarface’s eminently struttable "My Block") of the three new fathers in track suits and baby backpacks – but these moments rise only fleetingly to the surface of an otherwise altogether scummy pond. 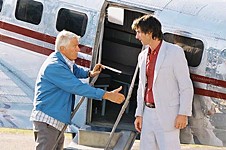 The Wendell Baker Story
The Wilson brothers deliver this shaggy comedy – which was written and directed by Luke and Andrew and co-stars Luke, Owen, and seasoned pros Harry Dean Stanton, Seymour Casssell, and Kris Kristofferson. Redline
Redline dives headfirst into onanistic autoeroticism, but this exotic-car movie feels ill-lubed and mechanical all the way.