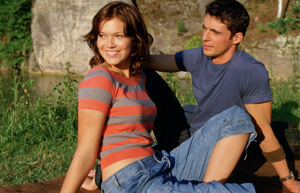 Following in the dubious tradition of the Great Volcano Showdown of ’97 (Dante’s Peak vs. Volcano) and the Epic Asteroid Clash of ’98 (Armageddon vs. Deep Impact) comes the First Daughter Faceoff of 2004, in which two like-minded projects battle for the hearts and minds of moviegoers everywhere. The more pedigreed First Daughter (directed by Forest Whitaker, starring Katie Holmes) opens on a yet-to-be-determined date, but pop singer Mandy Moore’s Chasing Liberty gets points for being first out the gate (but loses points for continuing another dubious tradition – that of the Wincing Double Entendre Title). Liberty is the Secret Service code name for first daughter Anna Foster (Moore), and chase is exactly what federal agents must do when 18-year-old Anna goes AWOL on a family trip to Prague. Having endured six years as first daughter and a father’s overprotection that extends to assigning a dozen trigger-happy Secret Service agents to her every casual date, Anna is itching for a little youthful rebellion. When dad (Harmon) breaks a promise and has her watched at a rock show, Anna runs away with a cute Brit backpacker named Ben (Goode), who is only too eager to help Anna in her ambition to, ahem, chase some liberty of her own. (By the way, the Roots headline the concert that Anna attends, and one wonders exactly what the leading members of the hip-hop intelligentsia are doing rocking out in a teen bubblegum flick. Laughing all the way to the bank, one presumes.) Anna and Ben stumble into one adventure after another as they crisscross the Continent from Venice to Berlin, but what Anna doesn’t know is that Ben is actually Secret Service, under orders from Anna’s father to keep a watchful eye on Anna while posing as a friend and possible love interest. Chasing Liberty is a thoroughly low-rent production, with a script mired in witless quipping and saccharine speeches, and acting straight out of bizarro land (case in point, the usually good Jeremy Piven as a lovelorn agent with an accent some awful amalgam of Jersey, Jewish, and garage mechanic). Newcomer Matthew Goode proves the only exception, delivering most of his lines in a strangely appealing, monotone mix of sarcasm and skepticism – and who can blame him, when his young charge, frankly, is a little shit with a nose for trouble and a penchant for petulantly whining that "prisoners have more freedom" than she does? Moore, cute as a button, has yet to overcome the earnestness that dogs her every acting endeavor, but she has a nice, safe chemistry with Goode. Their travelogue-ready romance is utterly doofy but not disagreeable, and this sort of wish-fulfillment fantasy will strike the right chord with Moore’s fan base of preteen girls. 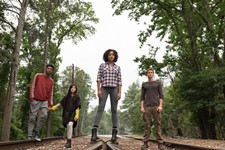 The Darkest Minds
Earth's last children hunted by their parents