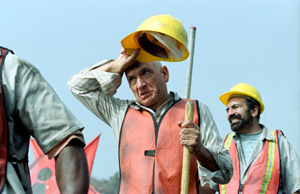 House of Sand and Fog

This moody screen adaptation of the Oprah-endorsed eponymous bestseller by Andre Dubus III's isn’t a slam-dunk success, but it has plenty of sleeper potential and is a feather in the cap of director Perelman, a Russian émigré who debuts here as a feature filmmaker after a career in commercials. It’s also unlike anything else you’re likely to see in the multiplex this holiday season: A star vehicle with a studio pedigree that is stubbornly uncommercial, emotionally raw, and hard to classify. It’s not a thriller, though the plot marches gravely forward with a sense of inexorable doom. It’s not a romance, though people come together ardently, with the fervor of addicts. It’s not a family drama, though much is made of intergenerational relationships and the dreams parents have for their children. It’s not an issues film, though it evokes matters of institutional racism and power, corruption, and cultural assimilation. In its singularity and matter-of-fact depiction of adult lives and problems, it reminded me of Lantana, an Australian sleeper from 2001. In both films the drama emerges organically from the characters, not the reverse. These are simple but compelling films about people who get in over their heads, who make poor choices consistent with their human flaws and suffer the consequences. Kathy (Connelly) is a housecleaner who’s inherited a California bungalow with a tax problem. Behrani (Kingsley) is the Iranian immigrant who buys the property in a public auction, outfits it with a widow’s watch, and plans to resell it for his son’s college tuition. Kathy is honest and well-meaning, but she’s disorganized and vulnerable, a barely recovered addict and a near recluse. Behrani is hardworking and intelligent, but he’s also proud and stubborn. A former colonel in the Shah’s army, he’s like royalty without a kingdom. Mix in a local cop (Eldard) and Behrani’s gentlewoman wife (Aghdashloo, a frequent collaborator of Abbas Kiarostami), and the situation simmers to a rolling boil. Under Perelman’s yoke, Connelly and Kingsley pull the film, and both deliver laudable performances. Because she’s so conventionally pretty, Connelly strains credibility in her role but only at first; her flintiness and quiet intensity leave a greater impression. She’s sympathetic, but she radiates an inner steeliness as her character grasps desperately at a house of cards. Kingsley’s is the showier role, and he’s completely invested and regal in bearing. There are problems with the Behrani character, and the conclusion of the story rings false, so in the film’s most heated moments Kingsley appears to be overacting. He’s actually working at the pitch required of him, but the pitch is too feverish. I’m inclined to chalk this up to a rookie mistake on Perelman’s part. He doesn’t contain his actors when we need him to, when Dubus’ story goes wild in the third act. These are serious problems. So is James Horner’s typically overwrought score. And while I should probably like the atmospheric exteriors provided by master cinematographer Roger Deakins, Perelman’s frequent cutaways to Highly Significant Wide Shots of Fog Descending bespeak a certain ham-fistedness. Just the same, in its more muted moments, Sand and Fog is a sterling example of what Hollywood can accomplish when it puts its trust into an offbeat project whose creative team has a different perspective on American life. 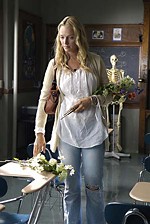 The Life Before Her Eyes
Although Uma Thurman and Evan Rachel Wood deliver strong performances, this film from the director of House of Sand and Fog is a muddled affront.