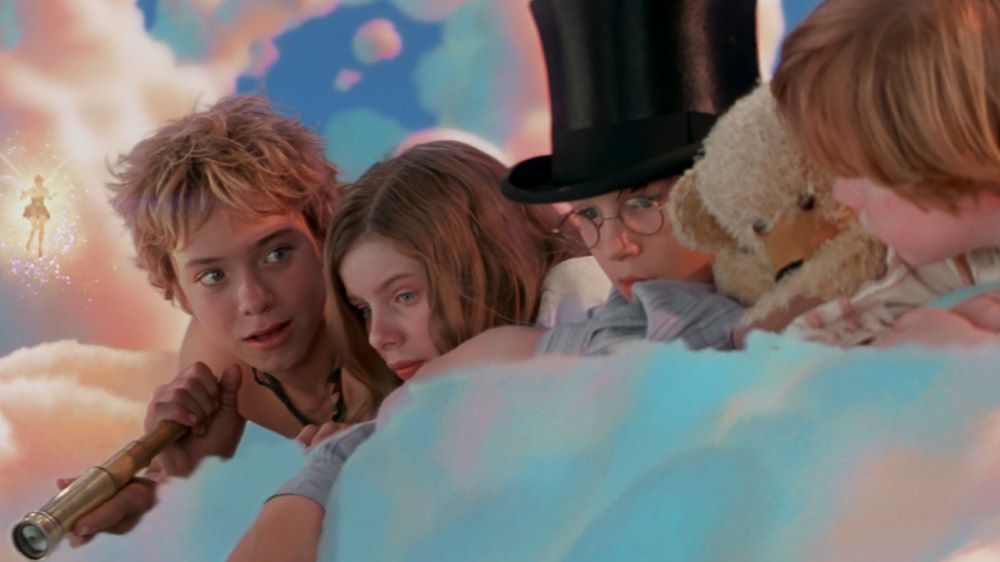 Nearly 100 years since J.M. Barrie’s stage play (and later novel) first arrived on the scene, the story of the youthful ragamuffin with bone-deep maturation issues and a penchant for swordplay finally makes it to the screen with all the psychoanalytic undertones intact. Steven Spielberg’s ambitious but flawed Hook beat it by a good 12 years, although Mary Martin’s TV Pan, which first aired in 1955 on NBC one year after its Jerome Robbins-directed Broadway premiere, is still the one most Panophiles recall, but this new version mines the story’s darker underpinnings for all they're worth. They’re worth plenty, too, and audiences expecting a live-action retread of Disney’s chaste 1953 animated version will either find this to be far more rewarding or an outright abomination in comparison to previous Pans.

You know the tale: One night in Victorian London the three Darling children – oldest Wendy (Hurd-Wood) and younger siblings John and Michael (Newell and Popplewell) – meet up with the airborne, petulant Pan (Sumpter) and fairy sidekick Tinker Bell (Sagnier, last seen oozing sex in Swimming Pool) and promptly fly off with him to Neverland, the mystical island where no one ever grows old and parents are discussed as though they were some intellectual abstraction. Once there, Wendy becomes surrogate mother to Pan’s band of lost boys, incurs the jealousy of the scheming Tinker Bell, and does battle with Captain Hook, the one-handed pirate and nemesis of Pan and his merry lads.

In a nice bit of casting that’s also something of a tradition to the tale, paterfamilias Mr. Darling and Hook are both played by Jason Isaacs (Harry Potter’s Lucius Malfoy), which adds a sly, Electral subtext that’s queerly distressing, especially when the adolescent Wendy begins to fall under Hook’s rancid spell. Both Sumpter and Hurd-Wood are adequate in their roles; Sumpter’s cocksure Pan is the only actor sporting an American accent in a sea of Brits, which is fitting since his Neverland, with its pop-culture amalgam of Indians, pirates, and endless adventures might as well be a canny metaphor for U.S. infatuation with all things youthful. It’s Isaacs’ florid, intelligent Hook that makes this Pan work better than you might expect. Pursued by the crocodile responsible for his denuded forearm, he’s part guileful spook and curdled authority figure.

Hogan has dressed up the proceedings with colorful CGI effects, with chewy peach cloudbanks and hyperreal production designs that make this at once the best-looking (but decidedly surreal) Peter Pan around and also add to the film’s mythic, unreal edge. Disturbingly, however, there’s also an obvious, budding sexual tension between Wendy and Pan, not to mention Hook’s leering, covetous take on the pre-pubescent pair – it’s like Baz Lurhmann’s version of Barrie’s work, flashy, energetic, and borderline creepy. Freud would have had a field day. A juicy script by Hogan and Michael Goldenberg is frenetic without being pushy, and there’s some genuinely memorable dialogue as when, confronted with Hook’s deadly blade, Pan says in effect, "To die would be a wonderful adventure." Fatalism such as this rarely makes it outside Star Trek’s Klingon proverb department, but Sumpter sells it, and his Pan is an ebullient trickster to the end. If you can get past the ick factor inherent in these suddenly adulterized relationships – and there’s really no way this film should have received a kid-friendly PG rating – and latch on to the film’s wealth of metaphor, you’ll surely have something to discuss over coffee post-screening.