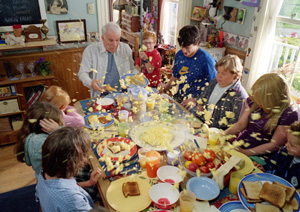 You might think it’s the new ad campaign for Planned Parenthood, however most advertisements possess more creative spunk in their few brief seconds than in all of Cheaper by the Dozen’s 98 minutes put together. The affability of Steve Martin and Bonnie Hunt as Tom and Kate Baker, parents of a brood of 12, injects a sense of game enthusiasm despite the mediocrity of the movie’s script and grand design. This Cheaper by the Dozen takes only the title of Frank B. Gilbreth Jr. and Ernestine Gilbreth Carey’s popular book about their more-or-less true experiences with multiple child-rearing, a book that, in turn, provided the foundation for the great 1950 movie starring the delightful Myrna Loy and the amusing Clifton Webb as an efficiency expect who applies his "science" to the "art" of domestic engineering. This new movie’s one scene of true hilarity – in which the preparation of breakfast and the family’s gathering at the table to eat is beset with physical gags, pratfalls, flying pancakes, and an escaped pet frog – is shown over and over in the trailers but really takes up only a few minutes of screen time and is hardly representative of the movie’s other 90 minutes. Things get underway when Tom (Martin), a Division 3 football coach in rural Illinois, is offered the job of his dreams coaching Division 1 ball at his alma mater outside Chicago and moves with his happy family from the countryside to the big city. (Accepting Steve Martin as a believable football coach requires a wee suspension of disbelief.) In her spare time while being an at-home mom of 12, Kate (Hunt) has authored the titular book, which demands she go on a two-week book tour to promote the tome. No problem, says Tom, but while Kate is gone the Bakers’ dozen turns the family’s domestic life into raging chaos. Young star Hilary Duff gets to play a secondary role for a change as one of the family’s elder daughters, who is the family’s self-appointed fashion expert, while Piper Perabo plays the eldest child, already out of the nest and cohabiting with her boyfriend (played by an unbilled Ashton Kutcher, who also delivers a couple of genuinely funny moments). Everyone learns a lesson by movie’s end: Don’t put work before family. Curiously, no one learns that all this could have been avoided with a good method of birth control.