One of the seven signs of the apocalypse – in film circles, anyway – must surely be the release of a dull John Woo film, previously thought to be a nigh impossible event tantamount to the discovery of life in Chevy Chase’s career. The latter is still, to the best of anyone’s knowledge, moribund, but Woo’s new Paycheck, dismayingly, is indeed a snore, and worse, it’s so generic in tone, execution, and payoff that it might as well have been directed by any journeyman straight-to-video helmer out there. This is nothing like the Hong Kong master of mind-blowing action who directed the excrutiatingly entertaining Hard-Boiled, and coupled with lackluster performances from Thurman and Eckhart, it’s one of the biggest letdowns of the year, a sterile piece of artlessness that lacks even Woo’s trademark ballistic ballets while treading perilously close to Steven Spielberg’s far superior Minority Report. That might be forgivable – both films were adapted from the work of mad genius Philip K. Dick, whose short stories have provided plenty of grist for far better films down the years (Blade Runner remains the most well-known) – but that Paycheck is so plainly a knockoff in which bad acting, bad pacing, and just plain inexcusable plot holes combine in an unholy alliance that’s enough to make you pine for the good old days of Hard Target, Woo’s initial American film that suddenly looks far better in hindsight when compared to this. Affleck plays Michael Jennings, a reverse-engineer-for-hire, who makes his living ripping apart other folks’ work and redesigning them from the ground up. Because of the precarious (and ethically suspect) nature of his work, he’s routinely required to have whole stretches of his memory erased by pal Shorty (Giamatti, the only remotely interesting thing in the film) so that his clients can rest easier at night. Jennings’ bank account may be brimming, but his own rest is troubled, and in one of the few notable touches in the film, he’s seen plopping down in front of his television, alone and lonely, to catch up on the Red Sox games he can no longer recall seeing. Enter Eckhart as corporate megascum Jimmy Rethrick, who offers Jennings a gilt-engraved carrot on a stick: some $80 million for the ultimate reverse-engineering project. The catch? It’s going to cost him three years of his life. Jennings, with no real interpersonal relationships to stay his hand, accepts, and suddenly it’s three years later, and there are no millions at the end of the rainbow. Instead, Jennings discovers he’s mailed himself an envelope of 19 mundane items – keys, a paper clip, a packet of cigarettes – which are, ostensibly, clues to figuring out what’s been going on in his life for the past three years. One of those clues is Uma Thurman, an employee of Rethrick’s, who may or may not have had a relationship with Jennings. Either way, people are suddenly shooting at him from out of nowhere, and the clock, as in all Dick adaptations, it ticking. Loudly. The premise is sound, but the script, by Dean Georgaris, drains the paranoid life out of the original short story, and what’s left is great, drifting gobs of exposition, bland action set-pieces (from Woo!), and Ben Affleck’s morosely furrowed brow. You’ve seen Roadrunner cartoons with more suspense than this entirely predictable hash. Maybe it’s time for Woo to finally make that musical he keeps talking about. 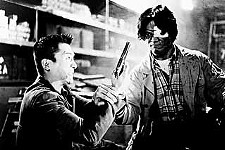