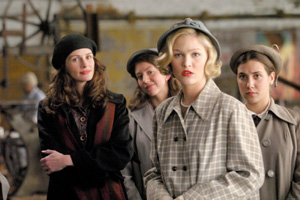 It’s curious that the film title references the most famously ambiguous facial expression in the history of art, considering the million-watt smile of Mona Lisa Smile’s leading lady, Julia Roberts, is the antithesis of ambiguity. Roberts’ smile – as well as that distinctive, endearing guffaw – gets a workout in this gender-switching rehash of Dead Poets Society. Roberts plays Katherine Watson, an art history instructor newly hired at the all-girls Wellesley College in 1953. There, Watson, a forward-thinking feminist and California "bohemian," is dismayed to find that her students’ academic and professional ambitions take a backseat to etiquette lessons and the all-important snaring of a husband. Watson zeroes in on a foursome of friends: Joan (Stiles), wavering between the opposing tracks of law school and housewifery; Constance (Goodwin), a sweet but "plain" girl convinced of her unworthiness; the boozy, sexually brazen Giselle (Gyllenhaal); and Betty (Dunst), the straitlaced daughter of alumni and the self-appointed Queen Bee Bitch of the lot. Betty takes it upon herself to bring down the good professor, mouthing off in class and writing editorials in the college paper decrying Watson’s "radicalism." Watson’s radical, see, because she teaches Picasso and Pollock and requires her students to think outside the textbook and to question what art really is. The students resist, naturally, thus requiring Roberts to employ not just the patented smile but also the time-honored furrowed brow and teary lip quiver. Roberts does a better-than-OK job (which isn't meant as a backhanded compliment but sounds like one), and she knows how to time a nervous laugh to maximum effect. But her character, as scripted, is an anachronism, a cardboard cutout tailor-made for some retrofitted feminism. The role of Katherine is but one piece of a whole that makes next to no sense; I can't recall another recent film so confused about what it's trying to say. One scene encourages sexual liberation for the girls, yet the only sexually active one of them is passed off as trampy. (The nail in the coffin? She's sleeping with her married, troll-like psychoanalyst.) As for the Great Housewife Debate, director Mike Newell (Enchanted April) can't decide if he wants the presiding philosophy to be feminist, postfeminist, or soccer mom; in any case, all three options have nothing to do with the reality of the Fifties. The film isn't a complete bust: There are some fun comic interludes, and snowbound Wellesley is gorgeous to look at, but there's just no reconciling the film's ambivalent message. Newell hangs a modern sensibility on a supposed period piece, and hangs his film in the process.