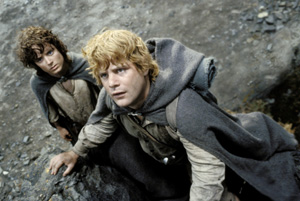 It’s over, finally and somewhat sadly, but it’s doubtless a relief to king of the Kiwis Peter Jackson that his epic, sprawling, and positively miraculous adaptation of J.R.R. Tolkien’s equally massive fantasy trilogy has finally, like the eye-opening sojourn outside the grassy knolls of the Shire by hobbits Frodo Baggins (Wood) and Samwise Gamgee (Astin), reached its inevitable conclusion. At 201 minutes (or some eight to 10 hours for all three films, depending on whether you’ve got the backside to handle Jackson’s monstrous, extended DVD director’s cuts), it’s about time. Before you toss me to the Orcs, fancy lads though they may be, understand that I agree that Jackson’s adaptations are indeed genius – no other epic since David Lean’s Lawrence of Arabia has managed the kind of emotionally crunchy and just downright popcorn-pure exhilaration as The Lord of the Rings, flawlessly combining state-of-the-art effects with a streamlined (compared to the novels, anyway) storyline and some of the most engaging acting in a hobbit’s age – and for pure story payoff, they trump Star Wars, The Matrix, and all of the Andy Hardy films combined. The Return of the King, the grand summing-up that traces the final steps on Frodo and Sam’s journey to cast the evil ring into the fires of Mount Doom while an evil empire threatens to engulf the world and Gollum (the seamlessly computer-generated anti-hobbit voiced by Andy Serkis) plots to snatch both their lives and their burden, deals with the redemption of its wandering, shortish heroes and of Middle-earth itself. As a grand metaphor for the pains of traveling abroad these days, it’s beyond reproach, but beyond the fantastic scenes of thousands of benighted monstrosities raging in battle (the freakish elephant things are particularly fine, as is the Orc leader with a face that looks as though he’d had a run-in with hometown antihero Leatherface) and Ian McKellen’s imperiously wise Gandalf the White, this is at its heart a tale of simple companionable friendship and the rigors thereof. It’s odd and unfortunate, however, that The Return of the King just barely misses the eye-misting emotional wallop of the series’ previous installment, The Two Towers, which had a lyrical subtlety underpinning the vast vistas of growing chaos (and Christopher Lee hardly hurt matters) and hobbits-in-peril. That film was almost sweet in its depiction of the hobbits’ troubles. The Return of the King, by no means a bad film, lacks that inherent tenderness most of the time, and when it does show up, Jackson overplays his hand: The film’s conclusion goes on and on and on like one of Jan de Bont’s action-movie endings, and I kept wondering if maybe Keanu would suddenly appear flying across the screen in a flaming bus pursued by Orcs on Vespas. But that’s just me. As the capstone to one of the single greatest achievements of modern motion-picture history, The Return of the King is generally peerless – Viggo Mortensen’s Aragorn, the King of the title, is inescapably Shakespearean in the meaty thrust and parry of his role, but it’s the oily, pathetically schizophrenic Gollum that exists at the core of the film, tormenter and tormented and tragic in the extreme. And as epic trilogies go, overlength and all, Jackson has managed a breathtaking cinematic milestone. (They used to have these things called intermissions, however.)