King of the Ants 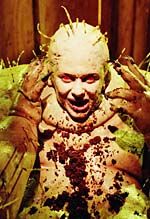 The title makes it sound like a horror film, I know. And given that King of the Ants is directed by Stuart Gordon, the holy father of filmdom’s horror classic Re-Animator, that would be a fair guess. But King of the Ants is better characterized as belonging to a suspense thriller-type genre. Containing only one or two images of grotesque or surreal horror, King of the Ants seems a bit unclear as to the overall effect it is going for. Indeed, the key photographic image used to market the movie is that of a creepy latex insect, yet that flash image is only used once in the movie and is likely to mislead viewers’ expectations. That said, King of the Ants is a pretty nifty thriller. The story is based on the novel by Charlie Higson, who also wrote the screenplay. The story shows what happens to the aimless young handyman Sean Crawley (McKenna) when he accepts an offer to perform the wrong kind of job. Sean meets a curious man named Duke (Wendt, in a performance that erases all vestiges of Cheers), who introduces Sean to his boss Ray (Baldwin, excellently playing one of those scarily volatile characters that the Baldwin brothers have now practically patented). Ray is one of those shady contractors who wants to have a City Hall accountant who is on to him bumped off – and the guileless Sean agrees to do the job. Things inevitably go wrong, and after the hit is performed, Sean finds himself also on the nasty receiving end of Ray’s vengeance. He is captured by Duke and a couple of Ray’s other henchmen, brought out to the desert, and brutally tortured for days. Then, once he escapes, Sean improbably hooks up with the unwitting widow of the accountant he killed, and it all culminates in a final blowout showdown. What’s most intriguing about King of the Ants is the naturalism with which all this gruesome violence is portrayed. The hit is performed with a sloppy amateurism that borders on comedy, and later actions have the feel of characters making things up on the fly. The film glides smoothly between comic moments and sheer dread in a manner that’s refreshingly unpredictable (until the film’s final shot of a burning conflagration in the background as a character walks away from the scene in the foreground). Still, the seamless performances and the story’s quirky progression make King of the Ants an intriguing indie effort. (Director Stuart Gordon and actor George Wendt will be present at the premiere screenings on Saturday and Sunday.) 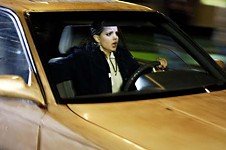 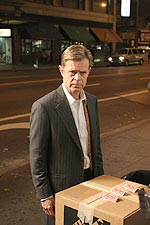