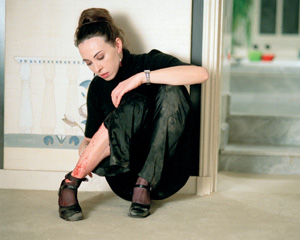 An antidote to holiday cheer like no other, this French tale of psychological horror is as harsh as they come – it’s like finding a severed finger in your stocking and then finding it’s even better with hollandaise. Marina de Van will be familiar to some as the screenwriter of François Ozon’s 8 Women, but she’s a revelation here, and a terrifically disturbing one at that. As Esther, a distracted thirtysomething woman slowly edging up the corporate ladder, de Van enters the story with an air of preoccupation. While attending a party with her best friend Sandrine (Drucker), she wanders outside for a breath of fresh air and ends up slicing open her calf on an errant piece of metal. Unaware of the extent of the injury, it’s only later she cloisters herself in the upstairs bathroom and probes the deep, bloody gash. And it’s here, alone in a restroom at a party she doesn’t seem to have wanted to attend in the first place, that this modern-day corporate cipher "finds" herself. Esther, in short work, becomes a "cutter," but far more so than the legion of teenage girls and adult women who transpose their frustrations and neuroses onto their bodies with razor blades and other sharp objects. Esther embarks on a love affair with her own flesh, locking herself away from her boyfriend and Sandrine and, eventually, her job and all extraneous human contact, to spend hours carefully slicing open her body to probe the mysteries beneath. It sounds horrific, I realize, and it is: In My Skin contains some of the most realistic and distressing images of self-mutilation ever filmed, and while anyone with even the tiniest slice of knowledge about the film will not be expecting to enter chez Disney here, In My Skin is even more repellant than, say, The Texas Chainsaw Massacre because de Van, not content to merely render Esther as a lunatic, also makes her curiously appealing, or, at the very least, somewhat understandable. She does this particularly well, too, and she does it by employing a parallel any lonely, disaffected, bored, or, let’s face it, horny person will immediately understand: She shoots the cutting scenes as though they were sex scenes. And not just tawdry porn, either – Esther’s gradual immersion into what can only be viewed, finally, as absolute madness, is done by degrees, as a slow lover’s seduction, until, by the end of the film, we see de Van lying on the floor of some nameless hotel room, sucking and nibbling away at herself in an increasing imitation of carnal lust and auto-eroticism. The flesh reborn as a sapphically onanistic lover. It’s something David Cronenberg would understand at a cellular level, I think. Cronenberg, the Canadian auteur of psychological malfunction, has tread similarly bloody board before, in films such as Videodrome and Shivers, and the latter’s rally cry – "Long live the new flesh" – could also serve as Esther’s mash note to herself. Why Esther embarks on this odyssey of self-destruction is never spelled out, and that’s as it should be. Her world, what we see of it, is sterile, lifeless, and gray, and it’s only when she opens up the red wet within that she’s able to fully come alive. In the end (which, by the way, is perfect), de Van’s shocking film is shockingly tender, a love story with scalpels and Betadine and moist copper kisses.