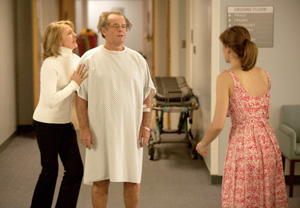 If a filmmaker is lucky, he or she stumbles across one moment of truth in a film. It sounds like not much, but actually, it’s something quite extraordinary: one moment that really feels like real life. Something’s Gotta Give, a mostly funny, if pedestrian, romantic comedy from writer-director Nancy Meyers (What Women Want), has one such moment. Erica Barry (Keaton), a long-divorced, fiftysomething playwright, has just had sex after a very long draught. Afterward, moved not so much by the sex, but the spark, she breaks down a little, smiling and sobbing, "I really thought I was sorta closed for business." It’s a heartbreaker: a moment of rare honesty in this gaffe-happy film about sex and the single girl … that is, when the girl stops being a girl and turns into an emotionally shut-off middle-aged woman. (We know she’s shut-off because she wears turtlenecks, even in May. Keep an eye on those turtlenecks – they’re an easy way to plot Erica’s progression.) The path to a plunging neckline begins with a surprise visit to Erica’s house in the Hamptons from her daughter Marin (Peet) and Marin’s 63-year-old boyfriend, Harry (Nicholson). At first impression, Erica doesn’t approve of Harry: He’s a dyed-in-the-wool bachelor, a romantic scamp who only has eyes for women under 30. But then Harry has a heart attack while attempting to seduce Marin, and Erica is afforded multiple opportunities to rethink that first impression. (Third or fourth impression is shaped by the sight of Harry’s bared buttocks as he trips around druggily in a hospital gown.) On doctor’s orders, Harry must cool his heels and his sputtering heart at Erica’s place, while she plays bed nurse and teaches him a lesson or two about the charms of women his own age. That doctor, by the way, is named Julian (played with aw-shucks sweetness by Keanu Reeves), and he, too, falls for Erica. It’s a delight watching Erica – after a decades-long dry spell, suddenly beset by two suitors – double-take then gape at this sudden new world of sexual and romantic possibility. We haven’t seen Keaton on the big screen in some time (lately she’s been directing and producing), but she’s lost none of the spunk, sass, and ditzbomb charm of her Annie Hall days. She, quite simply, is marvelous. Too bad her similarly iconic co-star is such a toad. Jack never stops being Jack, to great distraction. He doesn’t deliver his lines so much as smirks them, and when the film starts to get flabby (it goes on for half an hour too long), it has everything to do with the focus shifting to Nicholson’s character. What they say about sexual maturity might be analogous to the performances here: A man peaks out somewhere around 18, while a woman of a certain age – a woman of Keaton’s age – is just hitting her stride.