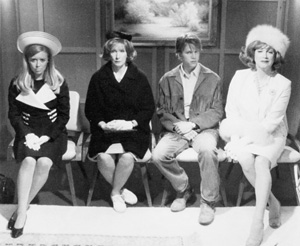 Die Mommie Die! wishes to spoof Hollywood’s melodramas of the Fifties, those women’s weepies of luxurious sets and household intrigue. This is the kind of movie Charles Busch was born to make. A stage veteran known for frequently performing in expert drag, Busch (who also wrote the Die Mommie Die! script) warmed up to this penultimate genre after his campy send-up of beach movies in 2000’s Psycho Beach Party. Busch is indeed wonderful in this new satire, so completely does the actor recede into the bigger-than-life character of Angela Arden that the viewer quickly ceases to notice that the part is being performed by a man pretending to be a woman. Despite this good central performance, i>Die Mommie Die! withers on the parodic vine. Neither a thought-provoking generic redux like Todd Haynes’ Far From Heaven nor a hilarious takeoff like some of John Waters’ best work, Die Mommie Die! plays more like a rote imitation of tripe. The film has no core belief in or respect for the validity of its generic roots and then deepens the problem through mere repetition minus insight. This film is bawdy though not terribly funny, outlandish but not particularly pointed. A very good supporting cast wanders through the movie as though on barbiturates, and first-time director Mark Rucker will probably go a long time before getting his next job offer. It’s impossible to make a great Hollywood melodrama without the great directors and writers of the form who took those predictable formulas and set-pieces and shook up the pieces to create a kind of subversive relevance. Without that overriding vision, Die Mommie Die! is little more than a throwback. Lacking sharp wit, outré performances, glorious visual commentary, etc., Die Mommie Die! seems more like an amateur revue, perfectly all right for what it is, but not meant to be seen beyond an audience of friends and family. 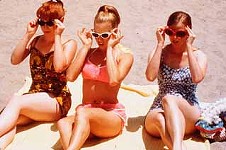