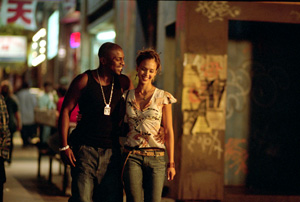 As a vehicle for former Dark Angel Jessica Alba’s lanky, streamlined frame and planklike abdomen, Honey is a knockout – there are nearly as many hip-hugging hoochie-wear and rail-thin hot bodies on display as in its two most apparent antecedents, Showgirls and Flashdance. While those concerned about the detrimental effects of female pop stars’ midriffs on young girls will find plenty to rouse their ire here, it's just as likely the film’s target market – teens of both sexes, with a preponderance toward hormonal males – will go limp with joy at the sheer amount of jiggyness going on. It’s a party, after all, and girls, no longer content to just want to have fun, now need to run their own dance schools for underprivileged South Bronx youth. As always, rent is expensive, but dreams are for free, and Alba’s Honey Daniels, a seeker after the hip-hop hoofer flame, divides her time between tending bar at the local megaclub and volunteering her choreographic skills at her mom’s neighborhood youth center. When she’s not instructing her class in the finer points of how to shake a tailfeather, she shares a flat with friend and booster Katrina (Gibson, whose own gamine frame treads unnervingly close to post-mortem). You can tell she’s for real because there’s Alvin Ailey posters all over the walls. "Girl, you got skills," Katrina sagely tells her, but it’s not until famed video director Michael Ellis catches sight of her dance-floor action and offers her a part in a Jadakiss clip that her fortunes take off. Impressed by Honey’s innate dance ability, he takes her under his wing and sets her up with a full schedule of big-budget Yo! MTV rappery, including Tweet, Ginuwine, and, later, Missy Elliott, causing his new pet star to briefly forsake her hoodrat friends in favor of chunky paychecks. When Ellis (finally) unfurls his sleazy tentacles on the mind-bogglingly naive Honey, it’s almost too late to care – it’s not too late, however, to recruit thug-in-the-making Lil' Romeo and pint-sized showstopper Zachary Williams to bring the boys and the funk and the cute-as-a-bug cavalcade of Inner City Youth Gone Right. Amid the endless stream of catch-a-rising-star movie clichés that Honey screenwriters Alonzo Brown and Kim Watson throw up and out are a few new ones, notably "skinny girls always win out in the end" and "hoochie bad, faux hoochie good." Or maybe those are already de rigueur and I wasn’t paying attention. (It’s been so long since I’ve been to End Up.) Director Woodruff has helmed videos for Toni Braxton and something nifty called ’N Sync and Britney Spears: Your Number One Video Requests … And More!, and it shows. Honey is dopey, obvious stuff – its plot wouldn’t feel out of place in an old Andy Hardy/Judy Garland clunker if you clothed a few extras – but the real performance here is from Alba’s billion-watt smile, the kind of cheery, chirpy laser beam that young males pray to have directed at them clubside on a nightly basis. It may be only a coincidence that said expression occasionally veers into Kristanna Loken’s T-3 facial mechanics, but then again maybe not: Dancing like that has to involve servo-motors somehow. 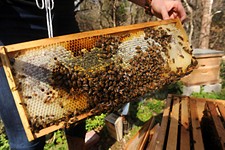 Bitch Betta Have My Honey
August is Honey Month 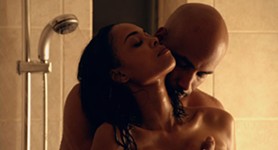