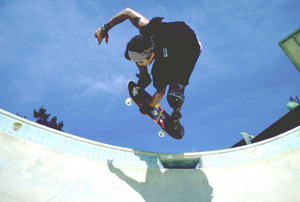 Stoked: The Rise and Fall of Gator

Skateboarding is not a crime, but the subject of this exhaustive documentary – infamous Vision Skateboards poster boy Mark "Gator" Rogowski, currently serving time for the murder of his ex-girlfriend’s best friend in 1991 – is very much a criminal. Think of Stoked as the anti-Dogtown and Z-Boys. That winningly adrenalized film mythologized the birth of the skating mystique, but Stoked details the mid-Eighties moment when skateboarding was moving from its punk rock, underground roots in Southern California to the main stage of Middle America. Suddenly, it was cool to skate, a fact that, in SoCal at least, had never been forgotten. One of the fledgling sport’s most photogenic and outspoken stars was Gator, a teenage ne’er-do-well whose mastery of the half-pipe and vert (as in vertical) skating was second to none. For a while, Gator was the face of skateboarding, and with his outlaw attitude and surfy good looks, it’s not hard to see why. But vert came and went, and, at the peak of his fame, so did Gator. His trademark style was replaced almost overnight in the late Eighties by the more accessible style called street, which eschewed the pendulous arcs of ramp riding in favor of smaller but no less difficult trickery closer to the firmament. Gator couldn’t switch gears fast enough, and was left high and dry in the semi-empty mansion bought with his Vision sponsorship and tour money, far from his better-acclimated friends such as Lance Mountain, Steve Caballero, and Tony Hawk. In a couple of words, he crashed and burned, and then, stung by the departure of his longtime girlfriend, got drunk one night and lured her best friend to his home, had sex with her, and then killed her, leaving her body in the desert. As a skateboarding documentary, Stoked is packed to the rafters with fine old competition footage and clips from Vision’s wildly popular skateboarding videos, but it’s Gator’s imprisoned voice (California law prohibits incarcerated felons from appearing on film, so Stickler interviews him by phone), that lends the film its most tragic overtones. He sounds, alternately, like a scared little kid and a regretful adult; as ever, the reality is somewhere in between. Interviews with Eighties-era skaters also fill in the blanks, and toward the end of the film one of them notes that Gator’s story is not unique – Christian Hosoi is now in jail in Hawaii for drug transport, Dallas-based Zorlac phenom Jeff Phillips committed suicide in 1993, and other skating luminaries have taken some hard spills off the ramp as well. Key to Stickler’s documentary, too, is an examination of the toxic fame that left Gator alone at the end. Just kids, barely, with all the money, girls, and skateparks they ever dreamed of, it’s no wonder some, like Gator, destroyed themselves when it all faded away.

Stoked: The Rise and Fall of Gator, Helen Stickler