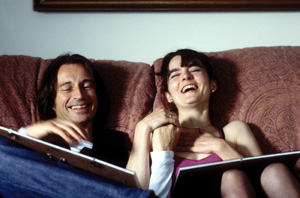 Once Upon a Time in the Midlands

Not to be confused with either Sergio Leone’s Once Upon a Time in the West or Robert Rodriguez’s Once Upon a Time in Mexico, this is instead a clever, albeit less than satisfying, romantic tale that uses Leone’s gunslinger mythos as a means to explore romance and regret. Carlyle, who will forever be Trainspotting’s thuggish Begbie to a certain type of filmgoer, plays Jimmy, a Scottish ex-con who witnesses his ex-girlfriend Shirley (Henderson) being proposed to by her current, live-in boyfriend Dek (Ifans of Human Nature) on national television. Meadows has a knack for capturing the queasy daytime talk-show milieu; the gangly, somehow misshapen Dek looks so earnest amid the harsh lighting and garishly colored set dressing. The proposal, however true it may be, is rebuffed, which thrills the layabout Jimmy back into action and puts the sorrowful Dek into a minor depression. Jimmy, suddenly pining for Shirley, slouches back into her life with an eye toward wooing her, and the film quickly transforms into a parody of black-hat/white-hat cowboyisms as Jimmy and Dek square off against each other in a seriocomic battle to win back their girl. Meadows is in Mike Leigh territory here, focusing as he does on the weary, beaten-down lives of England’s working-class heroes. He also touches on Bill Forsyth’s Local Hero by including among the wide-ranging mix of characters a number of local eccentrics, such as Shirley’s friend Charlie (Tomlinson), a woefully misplaced country & western singer whose grandiose ambitions far outweigh his musical abilities. Call it a cross between the feel-good scrappiness of films like The Commitments or The Full Monty and Ken Loach’s gritty urban dramas – Once Upon a Time in the Midlands is the sort of working-class comedy that may enthuse Brit audiences but often falls short of the mark in the States. Much of this is to do with the UK’s class system, which, while not nearly as prominent in society as it once was, is still in fair working order, instilling futures for some and grinding down the others. The effects of that grinding are all over the characters here – Jimmy’s tough-guy stance is pure East End, despite his being from Scotland, and Dek’s mousy groveling is purely of the English public school system. The rivalry between the two is what keeps the film going, but the bland, emotionally naked Dek is such a milquetoast throughout that you find yourself wishing Shirley would shack up with the more garrulous Jimmy just to save herself from a life of dull, predictably safe ennui. In the end, Meadows’ film lacks the bite it needs to make us care about this oddball trio, endearing though they are. It’s as though the director were afraid to unleash his inner Begbie, forgetting that Carlyle’s character was the best thing about British cinema in the Nineties. 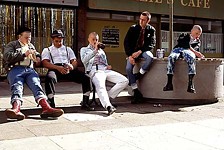 This Is England
Set in Thatcherite England, this semi-autobiographical story tells of a descent from mischievous schoolboy to junior skinhead.