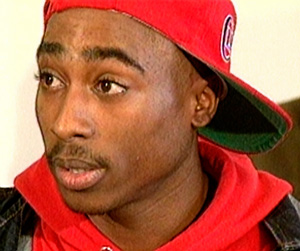 Death becomes him. It’s been a full seven years since hip-hop superstar Tupac Shakur left this mortal coil at age 25 in a hail of Las Vegas gunfire, and, like Elvis, he’s become more popular than ever, with posthumous releases outnumbering those issued in his lifetime. The question is why, and many of the answers are presented here in Lazin’s detailed but, ultimately, one-sided film that paints a picture of a fiercely talented and contradictory young man who, more than anything else, wanted to live up to his mother’s ideals. That mother, Afeni Shakur, was one of the leading female members of the Black Panthers; the film, which is narrated by its deceased subject via old interview footage and videotapes, posits that Tupac’s intense and loquacious ghetto warrior mind-set was a direct result of his mother’s full-bore engagement to the cause. She is seen, in photos, with various members of the movement, and Tupac is heard proudly reminiscing about the fact that his mother was arrested while he was in utero: "I was in jail before I was even born," he says, accounting for his lifelong anti-authoritarian stance. When, in 1990, Tommy Boy Records released Digital Underground’s track "Same Song," with Shakur’s standout rap layered over huge, rolling basslines, the result was nothing short of incendiary – to this day it’s one of hip-hop’s standout tracks, and Shakur adroitly parlayed his involvement with Shock-G’s group into his own breakout debut, 2Pacalypse Now, a year later. Celebrity followed almost overnight, and it’s here that Tupac: Resurrection gets down to work by revealing both the toll that fame took on Shakur and the brilliant self-awareness that allowed him to stay on top of his game for so long. To Shakur, one of the most philosophical hip-hoppers to come out of the early Nineties, that meant staying true to an ethos he called "Thug Life," a vaguely defined code of semi-ethics he dispersed whenever he was given the chance. Like much of his life, his varying definitions of the term (and the film presents several of them) are often at cross purposes, but the main one seems to be along the age-old line of staying true to his roots and maintaining his street cred. For a borderline gangsta like Shakur, however, this could mean keeping it real and staying down with his less fortunate homies or, conversely, living it up with gold ropes and flash cars. When, in the mid-Nineties, after signing with Suge Knight’s Death Row Records, he found himself pulled into a East Coast-West Coast rivalry with himself on one side and New York rappers Biggie Smalls and Puff Daddy on the other, his thug life suddenly took on a deeper and more dangerous meaning. Taunts, and then bullets, were exchanged on both coasts. Lazin’s documentary may be somewhat one-sided – Afeni Shakur’s involvement guaranteed that – but it’s still immensely enlightening, and a genuine gift to Tupac’s fans. Shakur’s murderers were never caught, just like those of Biggie Smalls, and so both his life and the film have an open-ended feel, and Lazin’s documentary treads awfully close to an MTV special writ large. (Nick Broomfield’s 2002 film Biggie and Tupac provides more answers for those inclined to look.) The only sure thing at this point is the sheer unlikeliness of a sequel. But then again, with Tupac, you never can tell.