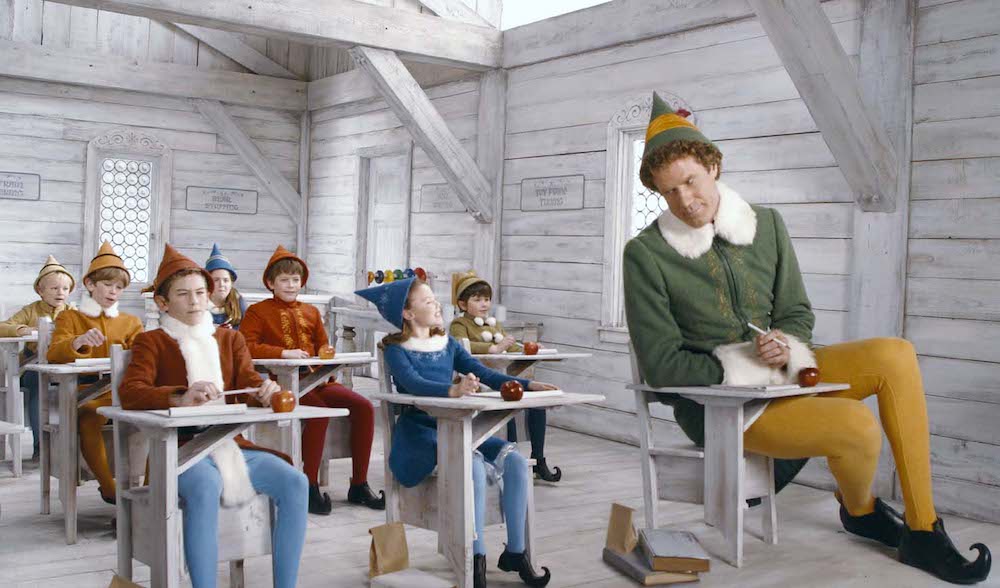 Elf is a movie that’s so profoundly ridiculous that it has to be admired, if for no other reason other than its sheer willingness to run with its premise and take it to the end of the line. In his first leading role in which the whole movie depends on his performance, former SNLer Ferrell demonstrates that he’s the one to call when there’s an impossible comic job to be done. As many have noted about Ferrell, he is fearless – which is no small feat when the eyes of millions will greet your every move. Ferrell has what it takes to play Buddy the elf and dress for an entire movie in yellow tights, green elf suit with fur collar, and matching hat and elf shoes, and play the naïf from the North Pole in Manhattan to find his biological father (Caan). The effect is something like those on-the-street segments that Letterman does on his show in which he sends out someone dressed in a bear suit to hail a cab or piles dozens of people in goofy costumes into a neighborhood boîte. It’s dumbfoundingly silly, and somehow we all emerge the better from the experience, psychologically cleansed and more willing to embrace the absurd. Well, Elf embraces the absurd with arms outstretched, not unlike the comic way Buddy’s surrogate father Papa Elf (Newhart) stretches out his arms for a hug with his many-times-larger son and gets more than he bargained for at first impulse. In addition to Ferrell’s comic pulse at the heart of the film, Elf surrounds its leading man with a choice group of actors (among them Bob Newhart, Zooey Deschanel, Mary Steenburgen, and James Caan), who are all individual masters of irony. Then for further laughs, the movie throws in the gruff Lou Grant (Asner) as Santa Claus and a sequence featuring Peter Dinklange (The Station Agent) that has to be one of the most politically incorrect – and the funniest – scenes in a movie this season. Plus, we discover that in addition to her talents that we’ve already discovered, Deschanel possesses a lovely singing voice. The other thing that Elf has in its favor – especially during a week when it opens against The Matrix Revolutions – is its low-tech look. Actor-director Jon Favreau makes it appear as if he has just graduated from Blue Screen 101 – and I mean this as a compliment. All the process shots and forced perspectives of a grown man among all the elves have something of a DIY aesthetic, a look that’s completely refreshing amid all the technological razzmatazz we’ve come to expect from movies these days. The aesthetic also comes closer to fitting in with the whole Christmas spirit in reminding us that the season is all about believing. Ferrell and company make us believe in this "deranged elf man," and in doing so offer the greatest gift of all.