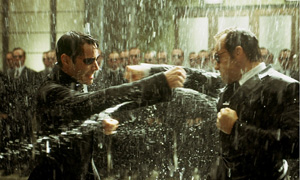 When we last left Neo, savior of humanity and scourge of all things technologically sentient, he was trapped between the "real" world and the "machine" world, which I suppose is marginally better than being frozen in carbonite between blockbuster sci-fi sequels like poor Han Solo but not quite as refreshing getting a good night’s stasis on the way back to wherever, like Ellen Ripley. The final installment in the genre-shattering behemoth collectively known as The Matrix finds Neo (Reeves), Morpheus (Fishburne), and Trinity (Moss) hunkered down in the subterranean city of Zion, last bastion of nonenslaved humanity and apparent home of Seattle’s cast-off cotton grungewear. The machines, by this point, are only some 24 hours away from breaking through and wiping out this pocket of human resistance to their strangely metaphysical anti-life above; Neo, God love him, chooses to pilot a ship to the machine city above and somehow – he’s pleasantly vague about the whole affair – stop the war between man and metal once and for all. He’s also got to deal with Agent Smith (Weaving, always the series’ most interesting character), the rogue program that threatens not only the flesh and blood below, but also the cable-heavy automatons above. And then there are the sentinels, millions of them, swooping and darting through the air like a school of metallic marine life. Attempting to figure out the nonstop chaos of The Matrix Revolutions without first having seen the other two films is akin to leaping into one of the later installments of the Final Fantasy game world with zero previous experience, and it can leave you bewildered and headachy. Luckily for the Wachowski Brothers, most of the Western world did, indeed, catch the first two. So now the big question is this: Does it rock? The answer is a qualified yes. Unlike its direct predecessor, The Matrix Reloaded, this installment forsakes much of the long-winded exposition in favor of some truly impressive battle sequences, which makes for a harried, exciting finale. The battalions of humans mounted inside robotic fighting outfits clashing with the eerie tsunami of sentinels is rip-roaring, sci-fi fun of the purest stripe, but for all its bluster and jaw-dropping computer graphics, Revolutions never quite manages to live up to the unexpected brilliance of the original outing. There’s love and sacrifice galore, yes, and the hand-to-hand combat set-pieces choreographed by legendary martial artist Yuen Wo Ping remain peerless, but all this action very nearly overwhelms the trilogy’s inherent intellectual pursuits. Still and all, it’s an impressive closing to the cycle, and, frankly, one that arrives not a moment too soon.