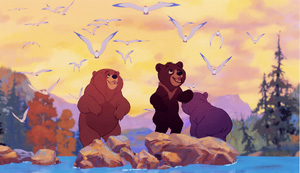 Less an old-school animated adventure than a series of platitudes with cartoon effects, Brother Bear is nonetheless awfully masculine for a Disney flick. There’s not even a hot First Nations chick, like the wasp-waisted and willowy Pocahontas – just a capering wise woman (voiced by Copeland) who looks like an apple doll. Set 10,000 years ago in an idealized Pacific Northwest at the end of the Ice Age, the story begins with lots of fist-pumping and woo-hooing as Kenai (Phoenix) and his two brothers (Raize and Sweeney) fish, ride mammoths, and yuk around in preparation for Kenai’s totem ceremony. (Given Phoenix’s "Whoa, dude!" mien, the ceremony seems kind of like a fraternity rush.) But Kenai is, like, really bummed to receive the "bear of love" – a teddy bear on a string – as his power animal. "Do you really think love has anything to do with being a man?" he asks. Whoa, dude! Events conspire to cast Kenai into the body of a bear so he can get totally schooled. Proving that the sidekicks are always more fun, the movie picks up when Kenai pairs with a wisenheimer cub (Suarez) and two kooky moose (Moranis and Thomas, doing their McKenzie brothers bit, right down to a joke about malted hops). But can Kenai make it to a certain mountain where the spirits swirl around like liquid plasma to the rhythmic chanting of a chorus of merry children? Will there be a cute "bonding" montage with sunshine and dandelion fluff? Will the songs by Phil Collins beat the audience into polite submission? Does a bear void in the woods? The plusses: It’s hard to fault a kids movie for trying to hook boys and teach a perfectly lovely lesson about brotherhood and caring as male virtues. And yes – I’m not made of stone – the animals are cute. I haven’t seen more delightful ursine antics since 1956’s Disney short "In the Bag" (with Ranger Woodlore and Humphrey the Bear). But the movie’s Achilles’ heel is its weak script, with its murky storyline and heavy-handed moralizing. You know there’s a committee at work behind the scenes long before the end credits roll. For all the effort poured into the background animation (which is lovely, for certain) and the original music (which is insipid) the storytelling craft seems like an afterthought. The characters are mechanisms who move along the plot arc from point A to point B. They’re not particularly memorable individuals, and the youthful audience at my screening gave it a smattering of polite applause.