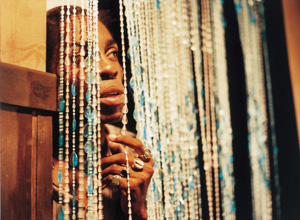 Set in the Rio de Janeiro of the 1930s, Madame Satã is inspired by the legends and myths that grew up around the real-life character João Francisco dos Santos, also known by his drag stage name Madame Satã. Born to slaves, João Francisco lives in Lapa, the city’s bohemian neighborhood, with two close personal friends, Laurita (Cartaxo), an unmarried prostitute with a young child, and Taboo (Bauraqui), a cross-dressing "slave" and co-conspirator. They form a little family unit. Often their money is derived from unwitting rich tricks, whom they collaboratively lure and then frighten away, minus their wallets. João Francisco also works in a cabaret as the dresser to the club’s resident diva. He sneaks around backstage wearing her costumes and lip-synching to the songs of his idol, Josephine Baker. But after he is caught, he is summarily fired and not given his back pay. As obsequious as he is in the cabaret, he is conversely the opposite on the street. Tall and powerful, he is skilled in capoeira-style fighting and has a quick temper. João Francisco and Laurita are regulars at the Blue Danube bar, a den of many iniquities, and following a prison stint João Francisco convinces the owner to let him perform his act. A second show results in a ruckus, which again lands João Francisco in jail, but 10 years later when he is released he returns to the stage, wins a carnival costume contest, and creates the persona of Madame Satã. Curiously, this is the conclusion of the movie. While the depiction of the Lapa district and the details of repressed homosexual life in Rio 10 years ago is always intriguing, we come away learning very little about the individual known as Madame Satã. We discover nothing that helps us understand his violent temper or his early years. And everything we learn about the creature he becomes is told to us in the film’s written epilogue. Made by a first-time feature filmmaker, the project could not have been an easy one to make, and it gains big points for effectively delivering us into this unfamiliar milieu. As a biopic, the movie has several shortcomings, but as a background story Madame Satã is full of atmosphere.