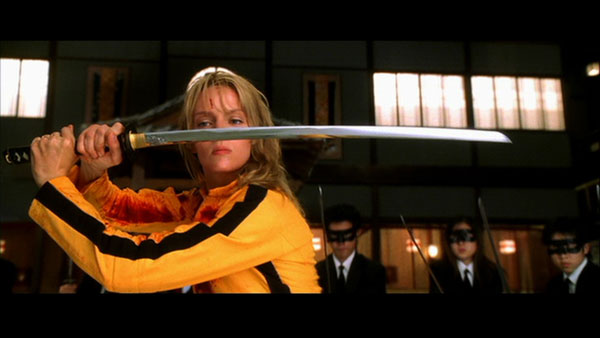 Kill Bill: Vol. 1 is Quentin Tarantino set on "11." Or maybe "Destroy." Definitely "Fun." In the six years since Jackie Brown, Austin’s favorite nonnative director has blown into town several times to screen selections from his exhaustive collection of exploitation and kung-fu flicks, semiregularly turning the Alamo Drafthouse Downtown into his own private film-geek academy, complete with chatty, epithet-strewn lectures on the nature of the game and the formative influences on his life and filmmaking. So it makes perfect sense that Kill Bill opens not with a bang – that comes a few moments later – but with a quote: "Revenge is a dish best served cold," an old Klingon proverb borrowed from one of Tarantino’s all-time favorite vendetta films, Star Trek II: The Wrath of Khan. It’s the perfect way for Tarantino to open his fourth film, signaling not just his supergeek status, which we all know by now is unassailable, but also tipping the hat to Ricardo Montalban, who doesn’t appear in Kill Bill but was almost certainly on the director’s mind as he wrote the deep red script. Khan, you might remember (or not), was the old nemesis of Capt. Kirk, who vowed to chase his quarry "round perdition’s flames" before "grappling to the last with thee" – and Uma Thurman’s character here, the Bride, she’s called, is pure, feminized Khan, right down to her warrior soul and dead offspring. Left for dead on her nine-months-pregnant wedding day by the band of colorful assassins she used to run with (the Deadly Viper Assassination Squad, headed by the unseen title character who is voiced by David Carradine), Thurman’s mangled antihero nurses herself back to health – over a period of years – and then heads out to do in the man (and women) that done her wrong. In between the nearly continuous freshets of gore that cover Kill Bill like some horrific abattoir dew, Tarantino has written and directed one of the most vibrant and violent mainstream films since the Seventies’ grindhouse wave he grew up on. Part homage to those wonderful old Shaw brothers’ Hong Kong chopsocky free-for-alls and part tribute to Japanese yakuza fighter Sonny Chiba (who has a small but critical part here), Kill Bill is a genuine mind-warper that uses everything within its director’s grasp – various types of film stock, color, black-and-white, and even some genuinely affecting Japanese animé footage done by the incomparable animation house Production IG – to tell what is, at this early point in the two-volume film, a very straightforward story. That’s not to say that Kill Bill is simplistic – as befits his "volumizing," Tarantino breaks down the film into literal chapters, with titles flashing on screen before each new sequence, and backstory galore, including, as the film’s pivotal animé sequence, the origin story of Lucy Liu’s astonishing O-Ren Ishii, who arises, phoenixlike, from the murder of her parents as a small girl to become the dreaded yakuza boss of all bosses. Much has already been made of the film’s climactic House of Blue Leaves showdown, during which the Bride takes on O-Ren’s literal army of sword-wielding henchmen (including Chiaki Kuriyama’s GoGo Yubari, a killer Japanese schoolgirl sex bomb with a penchant for maces) and leaves more body parts writhing on the floor than the demons in Sam Raimi’s Evil Dead 2 ever dreamed of. At a full 20 minutes long, it’s a hyperviolent, blood-drenched showstopper – just the sort of thing that gets Jack Valenti’s blood up. Somehow Kill Bill, for all its heavily fetishized girl-on-girl bloodsport, managed a hard "R" rating, which may well be the most shocking thing of all. The only complaint I can think of is this: Why divvy up the proceedings into two parts? Ultimately and unsurprisingly, Kill Bill: Vol. 1 feels like half of a much larger work; you can tell there’s more to come every time you hear Carradine’s grizzled voiceover. But no, we have to wait ’til next year. Thanks, Q.