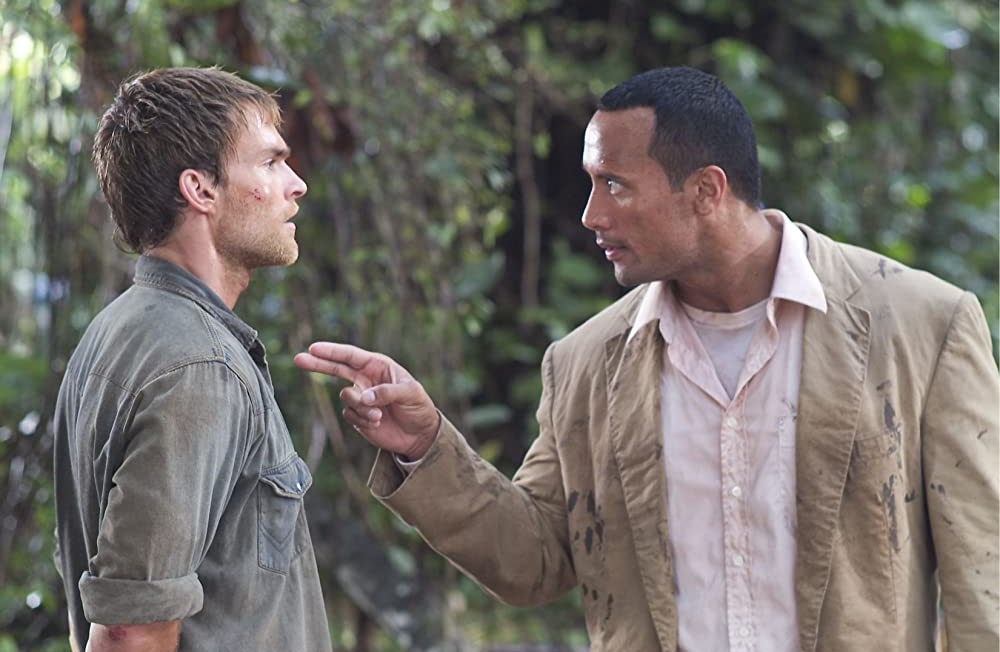 Like rocky road ice cream, The Rundown is chunky stuff, full of calories and easy to take in small doses. Also like rocky road, it’s bound to attract flies if you leave it lying around, and, more to the point, too much of it is likely to make you gag. That said, let me get one thing straight here: I like the Rock. He’s got what they used to call moxie, and with his mixed-race background, he may be the first crossover action star to bridge the gap between black and white audiences. For that alone, he’s worth watching, but as any good WWF fan worth his or her salt – Werner Herzog, for example – already knows, he’s also heavily laden with a heaping helping of superstar charisma. It’s damn near impossible to take your eyes off this strapping man-mountain, with his close-cropped black hair that looks as though it arrived full-borne from a G.I. Joe assembly line, and his huge, expressive eyes that vacillate between puppy-dog friendliness one moment and obsidian-shark deadliness the next. Someday he’s going to get the full-tilt-boogie action script he deserves, but this certainly isn’t it. The screenplay, from R.J. Stewart (Xena: Warrior Princess) and James Vanderbilt (Darkness Falls) is the sort of mishmash of action-hero and mismatched buddy-movie clichés that makes obsessive action-film geeks, such as myself and the friend I attended the screening with, gnaw our lips off in sheer desperation: Surely, somewhere, there’s going to be a clever twist, a wry dollop of sarcastic tough-guy dialogue, or, at the very least, a startlingly original knockdown-dragout bout of epic fisticuffs. Well, no, not in The Rundown, which appears to operate almost exclusively on the notion that if it worked in someone else’s movie, it’ll work here, too. And so we have the lantern-jawed Rock (who, let’s face it, would be great as Ben Grimm in The Fantastic Four), as steely-eyed "retrieval expert"-cum-bounty hunter Beck, sent on the proverbial "one last job" to the Amazon basin to bring back … Stifler. Well, wayward wannabe archeologist Travis (American Pie’s Seann William Scott) at any rate. Once there, the Rock runs afoul of local mine owner/slave driver Hatcher (Walken), who, in one of the film’s most unintentionally hilarious scenes delivers an amphetamine monologue on the tooth fairy. (Walken’s manic, maniac diatribes are getting weirder and weirder as the actor moves into the twilight of his career, almost as if the screenwriters were anticipating some sort of eventual mental collapse, and, hoping to prepare us for it, are even now easing audiences into the thicket of presumed impending dementia via increasingly ridiculous monologues. Hey, whatever, as long as Walken’s game, so am I.) Rosario Dawson appears as Travis’ rebel girlfriend, and Trainspotting’s Ewen Bremner pops up, briefly, as a mad Scottish airplane pilot, but the film belongs to the Rock. Saddled with some of the most cornball action dialogue of this or any other year, however, he has little to do but ramp up his megawatt charm and eschew the use of firearms until the very end of the film, during which his ongoing quasi-pacifist leanings (and the film’s moral center) are shot all to hell as he, well, shoots everything to hell. Sadly, the one thing not sporting a sucking chest wound at film’s end is Scott, who survives to annoy another day.