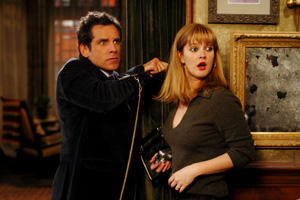 It wasn’t screened for critics, its release date has been pushed back repeatedly, and director DeVito’s last foray was the stink bomb Death to Smoochy, but there’s nothing dreadfully amiss in this Duplex. At its worst, this upstairs-downstairs farce set in a historical Brooklyn brownstone is just a so-so retread of DeVito’s peculiar black comedy Throw Momma From the Train. Not that anyone was exactly begging for a retread of weird-old-lady yuks; in order to live full and complete lives, we probably don’t need to see co-star Essel gilling off in her bathtub with a sea sponge or choking on a semimasticated chocolate caramel. But the film looks like Noël Coward compared to the trailer for the Farrelly Brothers’ Stuck on You, so make of that what you will. Alex and Nancy (Stiller and Barrymore) are mildly irksome bobos searching for the perfect New York apartment. He’s a novelist, and she’s a layout artist for some hifalutin midtown magazine. When they tour the titular dwelling, they fall in love with its spacious paneled parlor and the neighborhood park. Unfortunately, there’s a tenant above them – Mrs. Connelly (Essel), a wee Irish widow who turns out to be a major menace. Of course she has a squawking parrot ("I’ve had Little Dick for 40 years"), a blaring television, leaky plumbing, and a tendency to Riverdance, in full regalia, upstairs. Surely New Yorkers have put up with more, but since Alex and Nancy can’t evict her, they begin plotting her doom. The movie is at its best when poking fun at the couple’s yuppie pretensions – a goofy ornamental peacock is the butt of many jokes – and letting Stiller do his patented but effective schlemiel schtick. How far can Mrs. Connelly push him before his thin, worn nice-guy veneer cracks, and he throws her down the stairs? Stiller’s gift as a comic actor is the rage behind his crooked, dimpled smile, and he and Barrymore are fine here. There’s almost a breakthrough moment when the script (by Simpsons producer Larry Doyle) tries to take a turn into real satire. But DeVito is inclined to play it safe, with cutesy touches like a whimsical clarinet score and corny cartoon bookend sequences. Were it allowed to be dark, Duplex would probably be more interesting, possibly even with cult appeal. Call it a fixer-upper with potential. 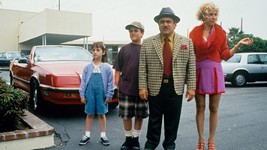 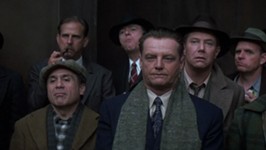 Hoffa
Upon leaving Hoffa, you'll find the legendary Teamster boss just as much of an enigma as you did going in... unfortunately, maybe even more so. ...