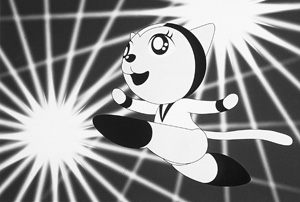 I’m tempted to call this the best film of the year so far based on its sheer originality alone, but my dog would never speak to me again. Simply unlike any Japanese animé I’ve ever encountered before, Tamala is jarringly unique from start to finish. So unique, in fact, that it hardly qualifies as animé at all. There are none of the traditions of the genre: no Blade Runner-esque cityscapes, no impenetrable William Gibson futurism, no multitentacled sex demons, and no motorcycles, J-Pop divas, or exploding two-headed Nazis. Everything you’ve come to expect from animé, and therefore everything that has curdled that most prolific of Japanese cinematic pop culture traditions, is missing. In their absence is the surreal, almost childlike story of Tamala, a young kitten from "Meguro City, Tokyo, Cat Earth, Feline Galaxy," who disobeys her human, anaconda-loving mother one day and ventures into space in search of the Orion Galaxy. An errant spaceship knocks her off course and onto mysterious Planet Q (or so a talking bird informs her), and she’s taken under the wing of a streetwise cat called Michelangelo. From him she learns that 1) there’s a battle going on between the dogs and cats of the planet and 2) he would prefer watching Clint Eastwood videos to having sex. There’s also a subplot about a giant corporate entity known only as Catty & Co., which rules the galaxy with its army of wandering advertising entities – imagine an animatronic Col. Sanders with a bloody axe in his forehead – and enough bits of sublime silliness to put it on par with the Marx brothers' most nonlucid moments. Taken as a whole (and at 90 minutes long, it can be a lot to take), the film seems tailor-made for druggy college parties, while at the same time being a clever send-up of our own emerging corporate monoliths. The most interesting aspect of Tamala, however, is the animation. Nearly all black and white, with occasional forays into spot color and neon weirdness, the simplistic, cartoonish renderings of the main characters recall both the Fleischer brothers and very early Walt Disney, as well as an unhealthy dose of Ralph Bakshi’s Fritz the Cat in the film’s flip, very adult tone, and even the Beatles’ Yellow Submarine. Fans of Richard Elfman’s 1980 cult film Forbidden Zone will recognize similar minds at work in the trippy, M.C. Escher-based backgrounds, and when the young, bug-eyed Tamala (how young we don’t know, but the frequent use of phrases such as "Shut up, you queeny twink!" imply at least a post-adolescent pussycat) walks around to music that sounds suspiciously like French techno-popsters Air, instead of the tread of her paws on a solid surface, what we hear is gooey, squishy sounds. Yes, it’s that type of film, although what type of film I’m talking about, even I’m not sure at this point. As we are informed in the film’s prologue, "Cats live in loneliness, then die like falling rain." Shit, man, whatever. This is so stupid it’s positively genius.