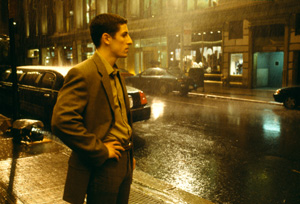 Anything Else is like an old magic trick – there’s an element of wonder in watching the sleight of hand again, but it no longer dazzles as it used to. For some of us, the waning magic in Woody Allen’s films in the past decade or so has been difficult to witness. With Anything Else, Allen returns to the romantic landscape of Annie Hall and Manhattan, ostensibly in the hope of finding his way again. The film’s mismatched young lovers are familiar enough. Jerry (Biggs) is a slightly neurotic joke writer in analysis; Amanda (Ricci) is a slightly off-center aspiring singer and actress with commitment issues. The beginnings of their romance – a love-at-first-sight attraction of the moth to the flame – promises something wonderful, and both Biggs and Ricci acquit themselves well in depicting the craziness of love’s first tug. But rather than course the development of this relationship in a way that gives it some context, Allen resorts to a gimmicky plot twist out of a stand-up comic’s repertoire: Not long after they begin to cohabitate, Amanda stops having sex with Jerry. The running joke here is that she’ll willingly engage in therapeutic infidelity with almost any other man, making Jerry the classic cuckold. The absence of any explanation for Amanda’s sudden lack of sexual attraction to the man she professes to love is the kind of sloppy, amateurish writing that has marred so many of Allen’s more recent films. Allen attempts to rehabilitate this narrative leap of faith by telling us that Jerry is the kind of guy who can’t end relationships, whether they’re professional or personal ones, but his insecure loyalty doesn’t make much sense. Allen plays a supporting role in Anything Else – thankfully, he didn’t see himself as Ricci’s love interest – and he occasionally exhibits his old comic chops. As the Central Park-bench philosopher who counsels the woeful Jerry, Allen’s mentor first comes off as eccentric and then as plain nuts. But his paranoid rants about Nazis and survival kits grow thin and, about two-thirds through the movie, you’re over him. (An extended sequence in which he convinces Jerry to purchase a rifle for self-protection is painfully inept and not at all funny.) The title of the film is supposed to evoke the idea of life’s capricious nature, but it ends up being a question about what more this movie has to offer. For anyone who has admired and loved Allen’s films, Anything Else is a bittersweet experience. It leaves you asking for more, even knowing that nothing more is forthcoming.