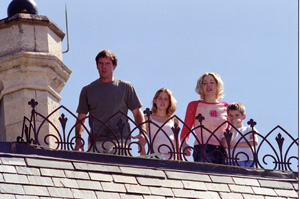 One of the great, unsung haunted-house movies of all time is Dan Curtis’ 1976 film Burnt Offerings, which took an urban family – dad Oliver Reed, mom Karen Black, and their young son – and placed them in the summer rental from hell, a crumbling Southern manse complete with rusting playscapes, deadly swimming pools, and a mysterious tenant in the attic. Add to this neo-Gothic horror show Burgess Meredith and crusty Dub Taylor. Director Curtis (the man also responsible for TV’s much-loved Kolchack: The Night Stalker) somehow managed to craft one of the creepiest spookers this side of Flannery O’Connor-meets-Stephen King. These days the film is remembered for the (literally) voluptuous horror of Karen Black, if it’s remembered by anyone at all. One person who clearly has seen the film is Mike Figgis, whose new mystery-thriller-whatever cribs from the first half of Curtis’ film (unintentionally, I suspect) and then tosses in dashes of Deliverance, Cape Fear, and any number of hoary old Southern Gothic clichés to make a film that, while not entirely a misfire, suffers mightily from a boundless series of those age-old and entirely inexplicable situations wherein otherwise bright characters do the dumbest things. It’s a case of bad things happening to witless city dwellers. Cold Creek Manor eventually feels like a much tamer version of recent horror fave Cabin Fever, except here, instead of a flesh-eating virus and snotty teenagers-in-jeopardy, we have a shirtless, sweating Stephen Dorff, which, frankly, is much worse. Stone plays Leah Tilson, who along with husband Cooper (Quaid) and kids Kristen and Jesse (Stewart, Wilson), take possession of a rambling mansion in the wild world outside of their former New York City homestead. The move is predicated by young Jesse’s near-death by automobile while crossing NYC’s famously treacherous crosswalks, and Leah, deciding that enough is enough (her corporate boss is also angling to make her a partner in the literal sense of the word), unwisely decides to leave the big city behind for good. The couple buys the titular Manor, which has been foreclosed upon and comes to them with, oddly, all of the previous tenant’s furnishings – and even personal effects – intact. It’s an estate sale from hell, and before you can say "white trash is my favorite flavor," in stalks Dorff’s Dale Massie, the house’s previous owner in the flesh (and plenty of it). In a movie that often seems based not on a cohesive script but on a series of startled looks, eerie music (courtesy of Figgis himself), and cheap shocks, the hulking Dorff stands out like a big black beacon for all things sick and twisted. There is, unsurprisingly, a murder or two lurking in the background of Cold Creek Manor, and once Dorff shows up, glistening with enough feral testosterone to make Sharon Stone look twice, the film takes off. And then, again and again, it stops dead, as such disturbing things as reptiles and evil patriarch Plummer, a man who apparently once killed several thousand sheep in 72 hours (and let’s hear it for farming automation, people) and brags about it from his deathbed, crop up in a failed attempt to keep things spooky. Preposterous is more like it. The only clear winner in this muddled and muzzy mess is the rapturously creepy cinematography of Declan Quinn (28 Days). All hazy blues and grays, it adds the only truly eerie touch to an otherwise moribund thriller that, sad to say, ends up being about as thrilling as cleaning out your garage. 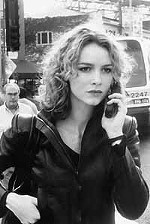