Kate Beckinsale has come a long way since playing Hero in Kenneth Branagh’s Much Ado About Nothing a decade ago. For one thing, she has fangs now, and has traded in Hero’s flowing robes for skin-hugging black leather and a wind-whippable black cloak that makes her appear as though she’s on her way to a Sisters of Mercy concert armed to her pointy white teeth with all manner of nasty firepower and an expression of perpetual exasperation, as if she realizes that most Americans only know her from her turn as Ben Affleck’s paramour in Pearl Harbor. All in all a good look, and much more interesting than Shakespeare’s somewhat goofy, giddy heroine. As Selene, a vampire assassin on the hunt for her species’ eternal enemy, the Lycans (that’s werewolves to you and me), the elfin Beckinsale cuts a mighty peevish figure, part unstoppable killing machine and part Bauhaus fanatic. She strides through Len Wiseman’s debut feature with the sure, dark footing of a killer born to privilege, while all around her the other vampires squabble and seethe and generally act as though they’d just stepped out of a Dark Shadows episode (this film has more melodrama than Barnabas Collins’ love life, and even more shaggy wolfmen). It is the perfectly cast Beckinsale who lifts Underworld out and away from the film’s many moments of silly gravitas and steers it into a truly interesting take on the whole vampires ’n’ werewolves genre. With a plot that can be viewed as either a metaphor for race relations or a direct lift from Romeo and Juliet (or both, for that matter), Underworld is a hoary, wannabe epic that nonetheless springs to icily gorgeous life every time Beckinsale enters the frame. She’s bad, she knows it, and she makes you want to be bad, too. Wiseman’s film feels as though it were adapted from a comic book or a graphic novel, probably one by Dark Horse that slipped by me while I was engrossed in Ghost World, but it’s not. The voluminous script, from Wiseman and Kevin Grevioux, is an original, oddly, that only seems to be arriving from some other medium. Much of this has to do with the enormous amount of exposition necessary to set up the complex plot machinations of betrayal and racial war among and between the vampires and Lycans. The film’s look is Gothic Matrix all the way, and Beckinsale’s Selene is obviously sporting more than a little of Carrie-Anne Moss’ Trinity in her clunky, punky boots and shiny, vinyl décolletage, but Wiseman has nicely eliminated some of the usual clutter from the backstory. For one thing, you’re never quite sure what time or place Underworld exists in – most of the production design seems borrowed from The Crow by way of The City of Lost Children, and the few normal people who turn up from time to time do so in order to flee in terror only moments later. Pre-Guiliani New York? Maybe, but I doubt it. The film is an American/British/Hungarian/German co-production, with the emphasis on Hungary and its legacy of blood. All told, it looks sumptuously deceased and enticing, just like Beckinsale, who owns this sternum-rattlingly loud film from start to finish. I don’t know about you, but I’m getting a Eurail pass as soon as possible. 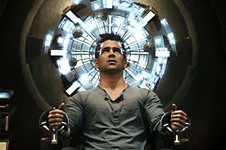 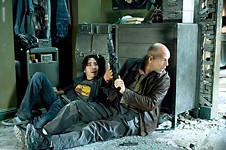