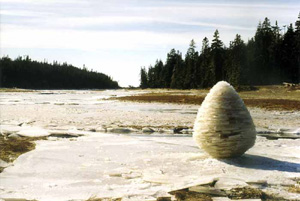 In theory, art should stand on its own … unless the art in question is no longer standing, but rather floating down a river in pieces or melting away in direct sunlight. Then, maybe, the artist has some explaining to do. The artist in question is Andy Goldsworthy, a Scottish sculptor of sorts who specializes in the art of the ephemeral, using nature and its resources to produce transitory pieces. The German-made Rivers and Tides documents Goldsworthy at work on this peculiar brand of art – art with a life span – in which the artist creates, then allows, even encourages, nature to destroy. Or, as Goldsworthy explains it: "The very thing that will bring a work to life is what will cause its death." Early on, we watch as he breaks off icicles with his teeth, then fuses them together with bare hands freezing over in the early morning chill of Nova Scotia. Painstakingly, he pieces the icicles together to achieve a ring of ice. He finishes, and the effect of the ice reflecting in the sun is glorious. And then the melting begins, and by midafternoon, there’s nothing left. Later, he spends all day trying to build a rock formation – it takes four tries to get the balance just right – and once he achieves his goal, he stands back to watch the tide sweep the rocks away. The whole process seems more than a little perverse – or at least in defiance of man’s inherent desire to leave lasting monuments. Actually, Goldsworthy isn’t quite as detached as we first would believe; he photographs each of his pieces before nature takes over, and these photographs in themselves are hugely artistic. Rivers and Tides takes that idea and explodes it: both capturing the artistic process and then what comes after, when no one but the artist is watching. If Goldsworthy’s art is performance art without the audience, then Rivers and Tides gives us front-row seats to the spectacle, with a camera adept at both the intimate and the epic. The film also inspires, if unconsciously, the viewer to rethink what exactly constitutes art. On paper I’d argue that a man scooping up snow, then tossing it in the air, sounds more like playtime than anything to ring up Artforum about, but on film the effect is breathtaking. Still, to garble the adage about a tree falling in the forest: If the camera weren’t there to capture the moment, would it still be art? Rivers and Tides leaves these questions alone, instead relying on frequent narration from Goldsworthy that, unsurprisingly, consists of abstract sentiments about flow in nature – abstract to the point that Goldsworthy tangentially muses over the "woolly mind … the essence" of a sheep. Thomas Riedelsheimer, who directed, edited, and shot the film, has too much reverence for the subject to challenge him; that isn’t Riedelsheimer’s agenda. It can be the audience’s. Rivers and Tides takes its time, leaving room for the mind to roam wherever: to challenge the art, or to revel in it, or maybe to wonder what is going on in the woolly mind of that sheep. 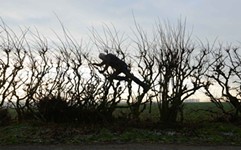 Leaning Into the Wind: Andy Goldsworthy
The enigmatic British environmental artist in the wild.