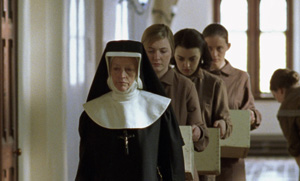 Pity the poor Catholic Church. As if things haven’t been tough enough of late, this week sees it cinematically battered by both The Order, which makes its members out to be power-hungry demon lovers, and now this fact-based film, which shines an entirely unwelcome light on the Irish Catholic Church’s vile practice of imprisoning young women it deemed too sexual (or even too comely) in massive convent/laundries, where they were lorded over by fire-and-brimstone nuns that put both One Flew Over the Cuckoo’s Nest’s Nurse Ratched and Strother Martin from Cool Hand Luke to eternal shame. The fact that this sort of thing ceased only in the last 10 years or so makes the film that much more alarming. It’s a brutal picture, full of terrible actions committed in the name of religion, and a number of Catholic organizations have come out in vociferous opposition to the project. (Granted, many of these are the same groups who first protested Monty Python’s Life of Brian and so may be somewhat suspect in their appreciation of both movies and irony.) Director Mullan, who had small parts in Danny Boyles’ Shallow Grave and Trainspotting before branching out into directing, has created one of the most harrowing, electrifying films I’ve ever seen, as shocking as any horror film (I kept expecting gaunt old Christopher Lee to wander in and toss someone in an iron maiden) but far more emotionally affecting, because the story is taken from the historical record. The characters are fictitious, but their sorrowful travails are, as Mullan has gone to great lengths to announce on programs such as National Public Radio’s Fresh Air, all too real. Set in 1954, The Magdalene Sisters has three young unluckies at its core: Margaret (Duff), who ends up at the Sisters of Mercy convent after being raped by a cousin during a wedding ceremony; Rose (Duffy), who bears a child out of wedlock; and Bernadette (Noone), who, with her ripe lips and voluptuous curves, is seen as a temptress by her guardians and is summarily placed in the care of the nuns simply for being too lovely, the better to keep the village lads pure as long as possible. Once at their new home, to which they’ve been consigned for an unknown number of years, the girls are regimentally stripped of everything from their clothes to their free will, until they are little more than slaves, both emotionally ruined and, in the case of Walsh’s addled Crispina, entirely mad. All four performances are genuine and beautiful in their own doomed ways. The girls’ chief nemesis is the flinty, wild-eyed Sister Bridget (McEwan), a character so single-mindedly nasty it’s no wonder Catholics have branded Mullan’s film anti-church. Indeed, there’s not a single example of a kind and loving priest or nun in the film at all – they’re all magnificently awful harpies and harridans and venal molesters. There is no doubt that the film is one-sided in its scathing critique, but it’s no less a powerful, battering picture for it. Mullan, who keeps his camera low and snaking through the dark corridors and steaming, dirty washrooms, builds a sense of paranoid, schizophrenic hopelessness that leaves the audience reeling, and while it’s perhaps not the best date film of the year, it is a grim and unmistakable masterpiece of bleak, black sorrow. 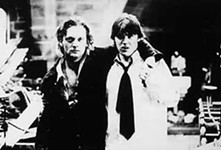 Orphans
I'm sure there are plenty of good things to say about Scotland, but you'd never know it from films such as Trainspotting and this 1997 ...