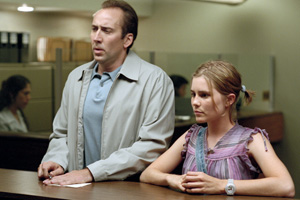 On the heels of other fun-loving caper films like Ocean’s 11 and Catch Me if You Can, the exceedingly stylish Matchstick Men briefly threatens to fall into that entertaining but empty retro conceit of palm trees and wide lapels. Crisis averted: Our huckster hero is no Frank or Dino clone, but Roy (Cage), an OCD-addled, chain-smoking germaphobe whose limited world-view only has eyes for canned tuna, Mr. Clean, and routine, always routine. Pills help, but it’s the work that saves Roy: low-level cons pulled off with his partner and protégé Frank (the ever-terrific Rockwell). But when, in a cleaning frenzy, Roy accidentally flushes his meds down the kitchen drain, the tics take over, and Frank packs Roy off to therapy. Dr. Klein (Altman) drills away at Frank until the pieces begin to fall into place: a broken marriage, an abandoned child. In a speedy (and indelicate) pushing-along of the plot, Dr. Klein orchestrates a reunion between father and child – now a 14-year-old, smart-mouthed skate punk named Angela (Lohman) – and Matchstick Men shucks off its big-con ambitions to explore something altogether sweeter: the discovery, 14 years late, of this marvelous new unit of daddy and daddy’s little girl. Roy takes Angie out bowling, dancing, even, quite cheekily, on a small grift; fathers are supposed to impart life lessons, but all Roy’s got is the art of the con. The film bets everything it’s got on the relationship between these two, and both actors rise to the occasion: Lohman, a 22-year-old who, not shockingly, prepared for playing a giggly teenager by hanging out at the mall a lot, nails Angela’s spastic charisma and teen histrionics, and Cage, following up Adaptation (in which he played another neurotic, and earned an Oscar nomination for it), digs in again, giving hope to all that his Nineties flirtation with broad-shouldered action types was just a passing phase. He’s far more fascinating as a squirming control freak. Director Ridley Scott, too, puts aside his flair for the epic (Matchstick Men follows his large-and-in-charge Gladiator, Hannibal, and Black Hawk Down); the guy just seems to be having a hell of a lot of fun here, playing with the camera (it handily mimics – or is that mocks? – Roy’s paranoiac freak-outs) and letting his talented cast of loose cannons boing off of one another. Nearing the climax, some killjoy insisted the film return to its con-artist roots, necessitating a third-act twist that is, indeed, a doozy, but a distracting one. You can easily lose five minutes making sense of it – and another 10 poking holes in it – but what of it? The preceding 100 minutes pass so pleasurably, the few false moves barely register – maybe the biggest con of all, but consider me happily snowed.