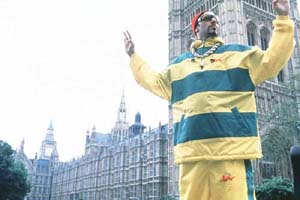 Like crack whores and Hummers, Ali G is an acquired taste, and not one that’s likely to win many converts with this, the British comic’s feature film debut. Americans have been privy to Ali G’s wiggacized antics only through his Da Ali G Show, which was picked up for stateside broadcast by HBO last season. That program, the brainchild of Ali G’s real-world alter ego Sacha Baron Cohen, was a cunning mix of sly mockery aimed at white suburban males striving, unsuccessfully, to be black, urban B-boys, and featured Ali G interviewing various world politicos (Buzz Aldrin, Brent Scowcroft, and former U.N. Secretary-General Boutros Boutros-Ghali among others), all of whom were utterly clueless to the gag, to genius effect. Clad in his trademark yellow track suit, the equally clueless Ali would lob them inane question cloaked in a UK ghetto patois so thick it’s little wonder no one had any idea what was going on. Ali G Indahouse takes Cohen’s character to the next obvious level, and loses quite a bit in the lack of translation. It’s not just that the film, with its dopey asides about the laborious British parliamentary system and references to everything from Bristol’s notorious clubs ’n’ guns problems to the peculiarities of British urban fashion, plays like a truly awful version of Intro to Brit-hop 101 – Ali G Indahouse, unlike its televised predecessor, just isn’t that funny. Like the recent Malibu’s Most Wanted, which was, essentially, an Americanized, West Coast version of Ali G’s spoofery, Indahouse revolves on an axis of sex, dope, and puerile body-function gags that wouldn’t even make it past Eddie Murphy’s more scatologically inclined writers on a bad day. Granted, stoned white kids acting black are just about the goofiest things in the universe these days, but Cohen (who co-wrote the script with Dan Mazer) focuses so much on the bountiful booties that bump through the frame every five or so minutes that there’s precious little of the canny comedy of the television show. Plotwise, there’s even less to brag about, although the film’s opening setup, in which Ali Uzis a platoon of South Central Los Angeles gangbangers, only to wake up and discover he’s being fellated by his dog, surely sets some sort of tasteless gag speed record that even the Farrelly brothers would be loath to touch. The crux of the story hangs on the closing of Ali G’s beloved John Nike Leisure Centre, a sort of government-sponsored youth center where inner-city adolescents can hang out and learn the finer points of "keepin’ it real" from the most unreal gangsta in the hood. In short order Ali finds himself co-opted by Charles Dance’s Carlton, who seeks to undermine the Prime Minister (Gambon) by attaching the flagrantly asinine G to his campaign. Shades of The Hudsucker Proxy, I know, but this is about as far from the Coen brothers as you can possibly get and still be using a Panavison. One extended joke on the fallibility of texting ghetto slang to your buddies rings out above the others, but the vast majority of the buffoonery is subpar wigga-schtick, and so witless that not even some seriously slamming tracks from the likes of So Solid Crew, Ms. Dynamite, and DMX can save this white-chocolate meltdown. What's Your Number?
Anna Faris does more nose-scrunching than acting in this abrasive comedy about people acting stupidly.