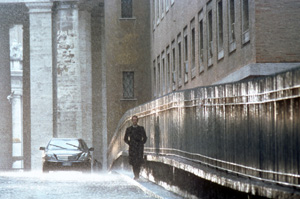 Brian Helgeland’s 1999 neo-noir Payback, which cast a rundown-looking Mel Gibson as a low-level crook desperately trying to settle an old score, was a terrifically nasty piece of work; it looked and sounded as though it had been shot not by a DGA member but by a junkie mainlining the smart-alecky ghost of Lenny Bruce. The flat, cadaverish tones of the film were as washed-out as I was when I first saw the thing – sick with a 103-degree temperature and in no mood for anything other than a coffin. Helgeland’s film nonetheless managed to transport me out of sickville and into Sickville. Gibson’s wisecracking, weaselly Porter spouted Helgeland’s clammy, hammy lines (co-written with Terry Hayes from Donald E. Westlake’s equally kicky novel) and looked as bad off as I felt. When a throwaway thriller like this can take you out of your own personal hell and into someone else’s, well then, that’s a director to watch. Which makes the plodding, moribund scares of his Catholic horror film, The Order, all the more dismaying. Helgeland’s previous film, A Knight’s Tale, utilized much of the same cast to crowd-pleasing effect, and before that he penned the flawless script for Curtis Hanson’s dynamite adaptation of author James Ellroy’s L.A. Confidential. Clearly, Helgeland has the writerly chops down pat, but The Order, which has enough blacked-out night scenes to qualify for FEMA assistance, isn’t remotely like the film noir of Ellroy’s novel, although I get the feeling that the director was aiming for a tough-guy horror show along the lines of Farewell My Lovely meets The Exorcist. What arrives onscreen (some nine months after its originally scheduled January 2003 release date) is instead a meandering tale of ecclesiastical whoop-de-doo with flourishes of sublimely silly gravitas. Casting the rosy-cheeked Ledger as a somber Catholic priest-cum-detective surely was the first mistake. It’s a bit akin to asking Tara Reid to pull off a Deneuve number, and although when in his element Ledger can be fine and true (à la A Knight’s Tale), here he’s just overearnest and jarringly out of place. You can tell he’s trying, though, because the usual gleam in his eye has been muted, and his previously blond locks are now a sort of amber-hued brunet. Along with fellow cleric Mark Addy (The Full Monty), Ledger travels to Rome when his priestly mentor is killed in an apparent ritual murder. He’s also accompanied by Shannyn Sossamon as a sexy-crazy dame fresh from the local asylum who may or may not be able to assist him in his search for the Sin Eater (Furmann), a creature who devours the sins of the departing so they may better enter the gates of heaven. There’s also a Vatican conspiracy subplot lashed onto the horror framework somewhere, but seeing as how the church is close to collapsing under its own perverse weight these days, even that seems a bit redundant and mean-spirited. All three leads were more interesting, or at least entertaining, in A Knight’s Tale, which used flash-rockers Queen to rousing effect while being blithely silly. The Order is just plain silly, and no Freddie Mercury in sight. 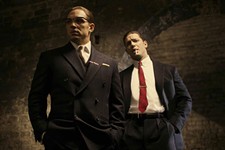