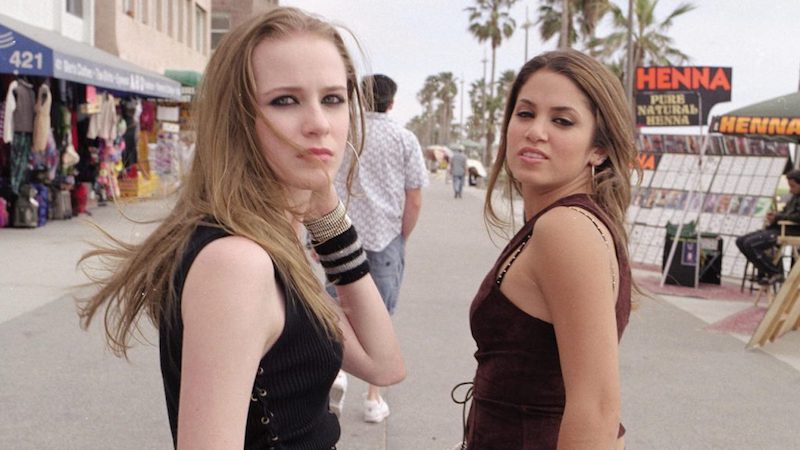 Catherine Hardwicke’s brilliant, terrifying Thirteen has been meeting a similar reaction to the one generated by Larry Clark’s film Kids when that film came out eight years ago. Both films deal honestly (some would say brutally) with teens out of control, awash in hormones, and drowning in peer pressure, none of it good. But where Clark’s film came saddled with the unmistakable air of arthouse bravado, Hardwicke’s picture plays more like one of those old auto-safety films retrofitted for those most luckless among us, the parents of teenage girls. And not just any teenage girls, either, but those just barely over the brink of their tweens: 13-year-olds. Think of it as the ABC Afterschool Special that no one had the cojones to air due to its unfettered, laser-beam gaze that bores straight into the horrifically malleable soul of young girls caught in bad situations. What’s a bad situation? In Thirteen, it appears to be pretty much everything. Winsome straight-A student Tracy (Wood) longs to be part of the in-crowd at her California junior high, but it doesn’t seem to be part of her teenage deal: She’s pretty, but her wardrobe is more Lizzy McGuire than Britney Spears, and she hangs out with, if not the unpopular crowd, then at least the second-tier geeks and smart kids who eddy through her school days somewhere behind the fast and the furious and the gorgeous It kids. In a word, she’s normal, or at least as normal as kids her age can be these days. This changes when a chance meeting with bad girl Evie (Reed, who also wrote the semiautobiographical script with director Hardwicke) kicks her social station up and out and into a superfast crowd marked by promiscuous sex, drug use, and all manner of familial disintegration. With her grades dropping like thongs on a bedroom floor, and as her mother (Hunter) struggles to make sense of and stop what’s happening – and finds herself unable to, Tracy explodes in a nightmarish, painfully realistic depiction of good-kid-gone-to-hellishness. It’s a stunning debut, surely the most painful and accurate depiction of the temptations that abound in our popular culture and incongruously demand young girls remain virginal while simultaneously shoving the dirty-sin fun of pop-star dominatrixes like Christina Aguilera down their beckoning throats. Wood and Reed are both phenomenal in their roles, but it’s Holly Hunter (as Tracy’s loving, 12-stepper mom, Mel) and Six Feet Under’s Jeremy Sisto (as Hunter’s recovering cokehead boyfriend) who provide the backbone to what could have easily been a gross exploitation of teen angst run amok. Hunter’s Mel has a palpable need to be her daughter’s best buddy. A former addict herself, and one who’s just barely clinging to the lower-middle class by running a beautician service out of the family’s crowded, fatherless home, Mel is forced into a maternal situation she’s never had to embrace before as a result of her daughter’s tailspin. Hunter owns this role like no other: You can practically smell the hair dye beneath her gnawed fingernails and the sheer panic in her voice as she watches a slow-motion disaster unfold beneath her own roof. Sisto, too, has a knack for playing the damaged adult, and you get the feeling that both these castoffs know exactly where these tiny party monsters are coming from. Shot with jittery handheld cameras and a bleached-out color palette that mirrors the onscreen meltdowns, Thirteen may be the most emotionally wrenching film some parents will ever watch. For the rest of us, it’s just plain unforgettable.