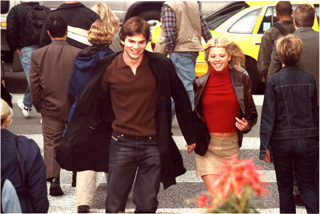 Opening weekend, Saturday night, 7pm: There’s a dozen or so of us in the audience, half of whom are 13 years old and crouched in the back row of the theatre, busy frenching a brace-faced boyfriend or girlfriend. They, at least, have an excuse. The rest of us suckers do not. Sight unseen, My Boss’s Daughter had the distinct whiff about it of a flop, of predetermined defeat; the telltale signs were a lousy release date near the end of August (typically when studios dump the films even deluded execs have given up on), next-to-no promotion, and a cast more celebrated for its offscreen antics than any onscreen talent or appeal. Simply put, the gut sensed a dog, and the gut was right. Go with the gut. Otherwise, you’ll devote 90 minutes to an insufferably boorish picture about a sad sack named Tom (Kutcher) who gets snookered into housesitting for his boss (Stamp). As is so often the case, Tom’s easy job is undone by one mishap after another: a coked-up owl barnstorming the neighborhood, a dead body that won’t stay dead, a mysterious case of butt-cheek inflammation, and an impromptu striptease from the boss’s hottie daughter (Reid). These complications are meant to be zany; instead, they range from uninspired to downright offensive. A stream of second-rate star cameos (including Carmen Electra, Jeffrey Tambor, Andy Richter, and Dave Foley) does nothing to enliven the film, nor does the exposure of Sir Terence Stamp’s naked buttocks. I did spend a solid five minutes wondering why his ass was so white and his face so perma-tan orange. Could they not find someone to match the two shades? Are these not professionals? Indeed, they are, or used to be: Director David Zucker once upon a time made a very funny movie called Airplane!. Twenty years later, he’s made a movie only a 13-year-old horndog could appreciate, and for all the wrong reasons. 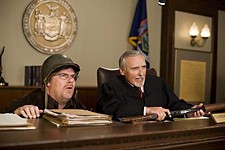