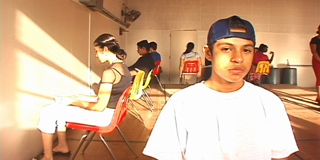 In a structural conceit that you would think might work to the detriment of this documentary’s subjects, director Kennedy juxtaposes scenes of George Schaeffer’s 1977 television version of Thornton Wilder’s Our Town with a group of Compton high schoolers working up the same material. The earlier production (with Hal Holbrook, Ned Beatty, and Barbara Bel Geddes) ends up looking dull by comparison, though, as, one by one, Kennedy introduces the dubiously talented group of Manuel Dominguez High kids, who nonetheless rally behind their big show with bizarrely affecting aplomb – Toto, I don’t think we’re in New Hampshire anymore. Compared with the other, and far better marketed kids-’n’-drama film opening this week – Todd Graff’s Camp – this is engaging stuff, with all the pitfalls you’d expect from any teen-mounted stage production, including internecine casting squabbles, titanic egos, a harried director (in this cast, the school’s English teacher Catherine Borek, who appears throughout the film in emotional states running the gamut from frustrated to joyous to borderline manic-depressive), and all manner of snafus. That the play is being mounted at all (and will it make it to opening night? Nail-gnawing tension abounds!) in a school where, we are told, there hasn’t been a play attempted in two decades, is something of a minor miracle. Compton, the embattled Los Angeles semisuburb, came to national recognition more than a decade ago as the subject of boastful gangsta rap courtesy of N.W.A, and later, during the L.A. riots. Kennedy makes sure to include plenty of shots that might back up this bullet-eye-view of the area, but his mission for the most part is inspirational in tone: If these kids can get it together and put aside their petty high school rivalries (heightened by various afterschool situations such as broken homes, sporadically violent surroundings, and the general malaise of West Coast inner-city life), then, by gum, anything’s possible. And get it together they more or less do, although, predictably, the staging of Wilder’s play is fraught with all sorts of problems. There’s never really any question of whether Borek’s charges are up to the task; the trick, instead, is making the old warhorse relevant to their situation, which takes the form of various minor changes in everything from the play’s setting (again, this isn’t New Hampshire) to costuming, which is altered to incorporate a more, let’s say, relaxed fit. Backed by a soundtrack of hip-hop and edited to within an inch of its life, Kennedy’s film has sleek gutter charm to spare. Would that the kids in Camp had been so uniquely interesting to follow. (OT: Our Town screens as part of the SXSW Summer Film series.)