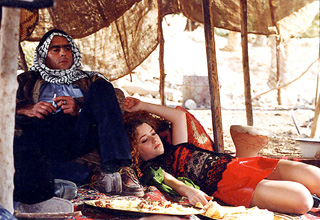 The modern Israel portrayed in this movie is anything but a holy land. Instead, the view it offers is one of the secular and quotidian, a teenager's coming-of-age story with all the warts left in. Although this first film by American-born filmmaker Gorlin is narratively spotty and, at times, unnecessarily difficult to follow, its vision of modern Israeli life is one not easily found among the daily outpouring of news and fictional stories from this familiar holy land. Something very real comes through in The Holy Land, despite the film's rockier moments, and the movie gives us a rare taste of the abiding conflict between the country's religious orthodoxy and its secularists. Young Mendy (Rehany) is having trouble concentrating in the yeshiva; his mind is constantly on sex and other forbidden fruits. He hides nudie pictures and comics in his prayer books until, finally, he is advised by a rabbi regarding a little-known provision in Jewish law that allows a distracted young man to go to a town where he is unknown and relieve his sexual tension with a female prostitute, preferably non-Jewish. Off Mendy goes to a brothel, where he falls instantly in love with Sasha (Semel), the Russian immigrant sex worker with whom he shares a five-second-long sexual experience. Soon we recognize Sasha’s world-weary voice as the one we heard in the film’s opening voice-over, reciting a cynical monologue about how the Russian immigrant workers are treated worse than Arabs by the Jewish ruling class in Israel and how she hates all men, particularly Arab men, for their "primitive and stupid" attitudes toward women. Despite the force of her opening monologue, the film’s central protagonist is not Sasha but Mendy, which makes for a bit of narrative incoherence. Mendy, meanwhile, convinces his parents that a move to the holy city of Jerusalem will help him keep his focus on his religious studies. Instead, he takes a job tending bar in a joint run by one of Sasha’s customers, Mike (Stein), with whom he has become friendly. Mike’s bar is an international refuge, somewhat like Rick’s Place in Casablanca, where Jews and Arabs drink side by side. Besotted by Sasha’s charms, Mendy becomes part of this group, whose outings lead to the movie’s abrupt and confusing conclusion. Although the narrative hiccups in The Holy Land can be chalked up to the mistakes of a beginning filmmaker, they are not disruptive enough to diminish the film’s realistic impact. Sights such as pole-dancing Israeli strippers and masturbating Orthodox men are, almost perversely in these times, a breath of fresh, and decidedly unkosher, air. (See p.48 in this week’s Screens section for an interview with the director.)