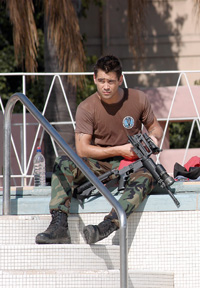 The original ABC television show S.W.A.T., which ran for little over a year back in 1975-76, wasn’t what you would call one of Aaron Spelling’s greatest hits, unless of course you were a Robert Urich fan who didn’t get enough of the actor in Killdozer the year before. Trite and violent (television historian Alex McNeil has gone so far as to describe it as "generally criticized as one of the most violent shows of the decade"), this TV show about the LAPD’s Special Weapons and Tactics outfit – complete with in-house rivalries, chesty dispatchers, and enough Kevlar to bullet-proof a Humvee – was a direct forerunner to NBC’s infinitely more palatable CHiPs a few years later, which raises the question: Why is Erik Estrada doing voice work for Sealab 2021 when he could be teaming with Bruckheimer and company to take back the California freeways? Instead, we have Top Gun recast in navy-blues with a truncheon ensemble from the LAPD. Opening with a bank robbery gone sour, S.W.A.T. wastes zero time in setting up lantern-jawed Farrell as ex-Navy SEAL-turned-S.W.A.T.ter Jim Street, who butts heads with department brass when he and his partner (Renner) disobey orders and save a gaggle of hostages the hard way. (Renner’s Brian Gamble takes out the bad guy by shooting through a female hostage’s shoulder.) Hotshot mavericks like that may have flown in former LAPD Chief Daryl Gates' day, but that was pre-L.A. riots; these days, apparently, being a team player actually counts for something, and so Gamble turns in his badge while Street is demoted to manning the armory. It’s there that he’s discovered by Jackson’s old-school S.W.A.T. cop Lt. Hondo, who’s been charged with forming a sort of über -S.W.A.T. unit to buff up the division’s tarnished image. In short order, he manages to secure LL Cool J and Girlfight’s Rodriguez along with a few others, which makes this version of the LAPD slightly more in touch with the times than its real-world alter ego used to be. From here on out, this quasi-rookie band of badasses must battle it out with nearly every gangbanger in the city and ensure the continued incarceration of a notorious international wastrel played by Martinez. Actually, in an unintentionally goofy plot twist, the bad guy in question isn’t very well-known at all, at least stateside, where he’s pulled over for a broken taillight and lands in county until Interpol manages to tip of the locals that he’s international public enemy No. 1 – at which point he offers $100 million to whomever gets him out. And so on. There are the seeds of a good cop story here, somewhere, but screenwriter Ron Mita and Johnson favor a lighter touch, portraying LAPD’s S.W.A.T. team as good-natured cowboys who dig the sound of automatic-weapons fire (and for all I know it’s the truth). Unfortunately, that just makes for 116 minutes of blueboy (and -girl) glory that plays like a recruiting advertisement for copper wannabes. Surely something more original than this could have been mined from the history of North America’s largest and most professional police force. As it is, though, Johnson’s film is just firing blanks.