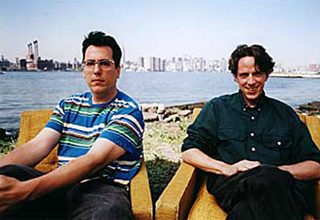 Gigantic: A Tale of Two Johns

No, it’s not a "wishful thinking" selection from aGLIFF, but a candy-coated valentine of a documentary about art-rock quirksters They Might Be Giants. (Actually, the world premiere of Gigantic occurred at the 2002 SXSW Film Festival.) Like its inspiration, the film often manages to be cerebral and whimsical concomitantly. (Unicyclists! Andy Richter! The Lincoln-Sudbury Regional High School Debate Team arguing about the metaphysics of "Particle Man"!) You’ll probably never see another movie with an introduction by Sen. Paul Simon talking about the Lincoln-Douglas debates, that’s for sure. Gigantic loves TMBG so much that its best moments are as swoony as a first date. The cameras catch Flansburgh at work recording a tape for Dial-a-Song, the message service that introduced TMBG to fans (via an ad in the Village Voice) and is still going strong. I’m not ashamed to say that certain sequences made me kvell: Adam Bernstein’s charming video for "Ana Ng," a positively ecstatic performance of "Birdhouse in Your Soul" with the Doc Severinson Orchestra. Watching a clip of the Giants hosting a long-ago episode of something called "Postmodern MTV" – featuring videos by the Replacements and PiL – is enough to make me want to cry for what might have been. In the best sequence, cultural critic Gina Arnold and others argue quite reasonably that unassuming little TMBG launched the juggernaut of "alternative" music. But is Gigantic good? It’s certainly thorough, with an all-star collection of talking heads (Elektra labelmate Frank Black, Syd Straw, Sarah Vowell, Dave Eggers) and a metric assload of concert footage. Some of it is revelatory (an early club scene of "Lie Still, Little Bottle" with "the stick" as accompaniment), but the rest is overlong for the documentary format. Schnack works too hard to make the case that TMBG are still musically relevant, with tedious segments of hipster celebs (Janeane Garofalo, Michael McKean) reciting lyrics and footage of hysterical fans sobbing as if they’ve been touched by the hand of Morrissey. The last section strenuously connects TMBG to the here-and-now (Malcolm in the Middle and The Daily Show). Maybe I’m old, but "the stick" from the earlier days is infinitely more interesting. Though parts of it speak to something greater – a groundswell of innovation in popular culture, the blending of art and music – at 102 minutes, Gigantic will likely test the patience of all but the most devoted fans, who’ll love the long scene in which the guys’ coffeemaker malfunctions.