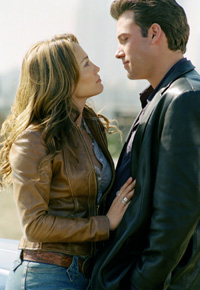 Critics and audiences were already primed to hate the laughably monikered Gigli, a film made immediately infamous for marking the start of Jennifer Lopez and Ben Affleck’s relationship and – more significantly – the firing up of the Jen/Ben media machine. But forget all that. You don’t even need the extra ammo: Stand alone, Gigli is wretched. And while the dirtiest, low-rottenest part of me wouldn’t mind watching the institution of Ben/Jen get reamed, the heft of the blame should be shouldered by Hollywood vet Martin Brest (Meet Joe Black, Scent of a Woman), who wrote an incoherent, incompetent script and further mangled it with his direction. The plot, as such, goes like this: A low-level hood named Larry "Rhymes With ‘Really’" Gigli (Affleck) is hired to kidnap a mentally retarded teenager named Brian (Bartha) in order to persuade Brian’s federal prosecutor brother to back off on proceedings against a New York don. Apparently, Larry’s reputation is less than sound because his boss then hires an independent contractor, Ricki (Lopez), to watch Larry watching Brian. Once hotheaded Larry cools off from the insult, he gets hot for something else: namely, his leggy colleague, who happens to be a lesbian. But that’s just a minor inconvenience in Hollywood. If you can stomach the inherent offensiveness of Brest’s thesis – that all Ricki needs is the love of a good man to "jump the fence" – then good luck with the film’s proposition that Larry is exactly the man in question. Y’know, Larry – the uneducated, passive-aggressive thug with a Neanderthal’s philosophy on equality of the sexes. One wonders when exactly Ricki, a Sun Tzu-quoting yogi, decided to go to bed with Larry. Was it when he reduced their professional dynamic to cattle relations ("boy bull, girl cow," but a slight, quadruped variation on "Me Tarzan, You Jane")? When he sputtered and swaggered about his superior oral-sex technique? Or when he slammed the retarded boy up against a wall? Ricki and Larry’s coupling is just one in a string of jaw-dropping leaps in logic on parade here. Also: When your cop brother is out looking for a mentally challenged, kidnapped teenager, is it really smart to cruise by your mom’s house with a kid matching that exact description? Larry’s cop brother, by the way, is played in a twitchy, one-scene cameo by Christopher Walken that might have made sense in a Tarantino flick, but is simply bewildering here; My Big Fat Greek Wedding’s Lainie Kazan pops in for a minute as Larry’s screeching, bisexual mom (and to the seemingly endless shot of Ms. Kazan’s ample, G-stringed tush: No, you didn’t). Al Pacino, too, appears for a one-off, thundering monologue as the NYC mafioso running from the feds. While uniformly overacted and ill-fitting, these three cameos temporarily distract from the film’s storied leads (which is a little like giving thanks for the plague of locusts that elbowed out that pesky plague of frogs). Affleck and Lopez have individually done solid work before; Lopez’s turn in Out of Sight was a masterwork of sass and sex, but that was under the tutelage of a far superior director, armed with a far superior script. Brest, however, throws his leads in the deep end with nothing to do but flap around and try to embody characters that are either noncharacters (in Ricki’s case) or utterly repellent ones (in Larry’s case). (And one more puzzlement: What’s up with Affleck’s East Coast hood accent, and what’s it doing in Santa Monica?) There is one small saving grace to be found here in newcomer Justin Bartha’s gentle portrayal of Brian, who is struggling to reconcile his sexually maturing body with his damaged head (the ambiguous nature of Brian’s affliction – which seems to jump from Tourette’s to autism to God knows what else – is the fault of Brest’s misdirection rather than a failing of Bartha’s). But Bartha is wasted, trotted out only to provide insensitive comic relief or to prod the leads into character transformations backed by blue skies and an effusive choir. Biggest asset botched, Brest gives us – like his leads – nothing to cling to. In perhaps the cruelest bit of all, he hasn’t even delivered a film so ludicrously, gloriously bad that it may be fun to watch, à la Showgirls or Glitter. Nope, Gigli is just bad. "Rhymes With Gigli" bad. 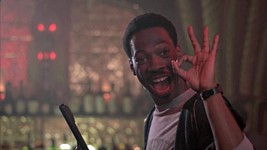 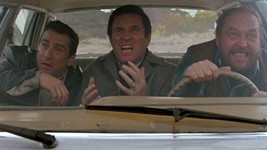