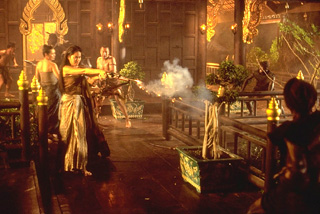 Exotic and epic, The Legend of Suriyothai brings to life events that occurred in 16th-century Thailand. The movie must certainly seem far less exotic in its native land, where Queen Suriyothai’s sacrifices for her country are the stuff of popular legend. Yet The Legend of Suriyothai was commissioned and underwritten by Thailand’s currently reigning royal family as a tool for teaching modern schoolchildren about their national history – indicating that even in Thailand Suriyothai’s fame is fading fast. Originally running nearly five hours, the film broke all Thai box-office records when it was commercially released in a truncated version that ran three hours and 10 minutes. Under the supervision of Francis Ford Coppola (whose name appears above the title as the film’s U.S. presenter), The Legend of Suriyothai has been further trimmed for international release to a two-and-a-half-hour running time that ultimately makes its continuity a little jumpy despite the buttocks-friendly nip-and-tuck. Imagine Cecil B. DeMille directing a sumptuous golden-toned Far Eastern historical epic – with a cast of thousands and lots of elephants – and you’ll envision something along the lines of what director Chatri Chalerm Yukol (himself a prince and member of the royal family) has created in this film. The formality of the performances and the stateliness of the images echo an earlier era of filmmaking and storytelling. However, to Western eyes, all the little details and stunning opulence will be fascinating to glimpse. The story begins as the young Suriyothai, a willful but still childlike princess, is forced to choose between marrying the man she loves and the man who would provide the best political match. The kingdom of Aythatha (ancient Thailand) is threatened with imminent civil war following a long period of peace, and Suriyothai’s sacrifice of her personal happiness is the first of many she will make in her lifetime. The film delves into various palace intrigues in which kings and courtesans indulge in nasty power grabs and coups, most of which begin with the subject of sex. As a character, Suriyothai disappears for much of the film’s middle section, although it’s hard to tell whether that’s due to inept filmmaking or the massive edits the film has endured. And that’s the problem with The Legend of Suriyothai as a whole: It’s a shell of its former self. Although the story and imagery are absorbing to watch, the details of the plot are sometimes hard to follow and fully digest. But enough of it survives to make this extravagant production a delightful experience for Westerners to watch.