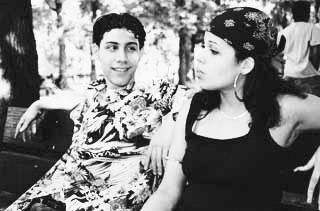 If you shy away from that sick feeling in the pit of the stomach that comes when watching good people make bad decisions, then best to steer clear of Manito, a low-budget indie that reaches near-Greek proportions of tragedy brought on by lousy decision-making. The film’s tone is initially optimistic, with a family abuzz with party preparations for Manny Moreno (Minaya), affectionately known as Manito, the youngest son who has just graduated high school with top honors and will be heading for Syracuse in the fall. He’s the pride of this family fractured by an absent father and an older brother fresh out of jail named Junior (played by a commanding Franky G). Manito is smart, respectful, kind-hearted … and poised for a tragic fall. Throughout, Manito telegraphs that bad things are just around the corner, with fateful slo-mo shots and the kind of dialogue – like "don’t do anything stupid" – that guarantees a hotheaded character will do just that. The plot is a relentless downer, but Manito excels at establishing the atmosphere of Manny’s Washington Heights home, especially in a breathless sequence juxtaposing the early-morning activities of its characters that nails the energy and urgency of the neighborhood (a testament to Austinite Kyle Henry’s skill at the editing bay). Writer/director Eric Eason’s dialogue often rings with plainspoken authenticity, exhibited in the teenaged bravado of Manny’s friends and the inner-city reality of his new girlfriend, who can’t come to the party because, she explains, "I’ve gotta babysit my son tonight." The dialogue bounces between English and Spanish, fitting for this loud, loving family of four generations. There are so many to choose from – including Manny’s brothel-hopping grandfather (González); his brash, womanizing brother; Junior’s put-upon wife (Lopez), all more interesting than the nice but bland Manny – that Eason could have easily devoted the film just to getting to know them, instead of shucking character development midway through for one calamity after another. Alas, what begins promisingly eventually loses itself to melodrama. Manito received the Jury Award for Best Narrative Feature at the 2002 SXSW Film Festival. 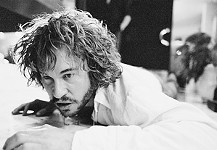