For better or worse, many of us, myself included, have had our notions of foreign lands shaped by the films we watch, especially the films we first see when we are young. As a boy I thought Italy and Greece were sunburnt, postwar paupers’ lands populated exclusively by Anthony Quinns and Giulietta Masinas, strongmen and fools – all dancing on tables. That was a long time ago, though, and now, of course, I know Italy is a country so enamored of its hedonistic impulses that they elected adult-film star Illona "Ciccolina" Staller to Parliament and have managed the remarkable feat of re-imagining their governmental system nearly every year since the toppling of Mussolini. Reality and a particular sort of sun-drenched dreamtime have always seemed to commingle on a moment-by-moment basis in Italy, and so the peculiar, vaguely magical flavor of Respiro feels more natural than if this story had arrived from, say, lock-step Germany. Respiro, which has Valeria Golino (Frida, Hot Shots!) as Grazia, a wife and mother prone to increasingly bizarre behavior that is apparently caused by an unspecified mental aberration, is set on the Sicilian isle of Lampedusa, which sports the blinding sunshine and rocky, treacherous beachheads of an erotic dream sabotaged by the willies. It’s the sort of place where the plants are scrubby and too dry, but surrounded by fields and, in the distance, a seemingly peaceful village, where you just know anything can happen, despite the lazy drowse of the heat and ceaseless whine of unseen insects. You can almost feel the dull heat radiating off the screen – it’s a wonder cinematographer Fabio Zamarion’s lenses didn’t simply melt clean off – and this thick and hazy brilliance infuses the story with all sorts of strange neo-realistic vibes. Grazia’s plight, apparently, is one of manic-depression. She’s prone to nude dips in the sea and being overly friendly to the local pack of wild dogs the townspeople keep safely imprisoned in a makeshift kennel outside of town (a ravenous group of howlers that are later freed by Grazia in a moment of brave lunacy). Despite his obvious love for his wife, Grazia’s fisherman husband Pietro (Amato) appears dumbfounded at her increasingly unwarranted actions and is torn between sending her away to a hospital and keeping her safely within the family unit. That unit includes her two sons and daughter. It’s young son Pasquale (Casisa) who finally takes matters into his own hands and goes to the grand lengths to hide his mother away from the villagers' prying eyes and panicked minds. As a metaphor for the rigors of convention thrust on wild free spirits, Respiro scores high – if strange – marks, but I think it’s more in love with the quirky nature of life on a small island, which, unsurprisingly, echoes life in any small town, be it here or on some faraway Sicilian isle. Golino artfully walks the fine line between barely contained madness and an epicure’s love of life – an Italian cinematic tradition that goes at least as far back as Fellini’s early films. It’s sweet, disarming, and ultimately dangerous ground to tread, but no less enticing for it. 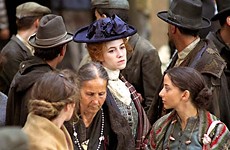 Golden Door
Despite the hardships depicted, Golden Door is a sweet film that plays witness to the immigrant birth pangs of modern America.