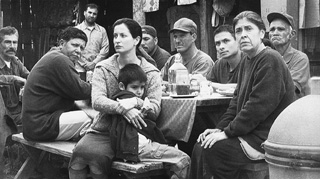 John Carlos Frey pulls off the proverbial hat-trick in his low-budget indie film The Gatekeeper. As the co-producer, writer-director, and star of this fictional Mexican-American border film, Frey’s command of the movie is near total. This is both a good thing and a not-so-good thing. Good because he brings wealth of firsthand knowledge to this story which concerns a subject that has been inadequately depicted on American movie screens: the plight of migrants who surreptitiously cross the border from Mexico into the U.S. Frey speaks with authority in his feature-filmmaking debut, having had a front-row seat to the traffic flow while growing up south of San Diego, a quarter-mile from the border. (He was born in Tijuana.) Frey’s drama has many edges and little moments that burst with authenticity and passion for release. However, The Gatekeeper also suffers from Frey’s diluted multitasking. The director, writer, and star are not equally talented (and at least one of the co-producers was not in a position to be objective about that situation). Laudable for having made it to the screen, Frey’s script is nevertheless marred by some awkwardly developed sequences – including the film’s opening scenes, which are unnecessarily difficult to follow. But in-between its bumpy start and platitudinous ending, The Gatekeeper covers some intriguing and important terrain. Frey plays Adam Fields, a U.S. Border Patrol agent who is also a self-loathing Mexican-American. Fields, more than anyone, wants to stem the tide of the "Mexican invasion" and moonlights at night among an organization of racist vigilante xenophobes. Fields has some seriously disturbed "issues" simmering beneath his placid exterior. A crass moment with his unsuspecting fiancée and a primal-scream meltdown with his estranged mother indicate the depth of Fields’ inner torment. The Gatekeeper kicks forward when Fields decides to go undercover as an illegal immigrant to help out his racist group’s recruiting efforts. By wearing a hidden camera, he plans to document what he regards as the true scourge of the Mexican tide. Anyone who’s seen Sam Fuller’s Shock Corridor (in which a newspaperman has himself committed to a mental institution so that he can get the material to write a Pulitzer-winning exposé), or dozens of other plots just like it, knows what comes next: The hero will find himself upstream without a paddle – or in Adam Fields’ case, across the Rio Grande. Something goes terribly wrong during Fields’ journey across the border, making it impossible for him to resume his former identity without risking death by blowing his cover. Suddenly, he has no identity but that of an undocumented worker, who, by day, is forced to work in one of the syndicate’s crystal meth labs in order to pay his freight and, by night, is forced to sleep outdoors in a barn. Inevitably, the abominable treatment Fields and the others receive turns his head around and causes him to finally bond with his fellow migras – especially a single mother named Eva (Agnew) and her young son. Fields’ path toward truth and redemption, though basically predictable, is a bit hard for the audience to take since his behavior up to this point has seemed more loathsome than sad. He is not a terribly sympathetic hero, a problem that might have been corrected with more attention to the character development. All in all, though, The Gatekeeper is a commendable effort that draws attention to a largely invisible problem.