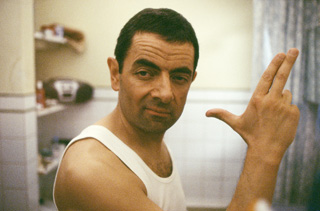 It’s perhaps not the best idea – at least on this side of the pond – to have soulful British ne’er-do-well-cum-pop-music-phenom Robbie Williams warble the theme song to this 007 parody. Williams’ star power can produce flash burns in the UK – over there he makes Michael Jackson look like, well, Michael Jackson – but the former boy bander has developed something of the kiss of death over here. You may have seen his episode of MTV’s Cribs, but chances are you haven’t heard a note of his music; a recent push to "Americanize" Williams fell as flat as the Posh 'n' Becks jersey sales at Niketown. Oasis would’ve been an easier sell at this point, and although Johnny English kicks off with some breezy retro titles, the film, like Williams’ inky Weltschmerz, is a messy affair. Fans of BBC America’s Mr. Bean and Black Adder programs will be eager to see what the rubber-faced comic Atkinson is up to these days (Bean was made into a movie a few years back, but for the rest of us he remains the vicar-gone-awry in Four Weddings and a Funeral). For my money, he’s never been better than in the woefully underappreciated Mel Smith comedy The Tall Guy, where he very nearly managed to upstage both Emma Thompson and Jeff Goldblum, no mean feat if you’ve seen their riotous sex scene. Here, however, in a limp, post-Austin Powers riff on the spy game, he’s working from a script (by Neil Purvis, Robert Wade, and William Davies) that seems stuck in borderline Benny Hill territory, complete with scatological upgrades and some of the most atrocious dialogue in recent memory. Twittery only goes so far, however, and John Cleese took it just about to its doggedly sycophantic end years ago as Basil Fawlty. Atkinson is far less subtle. For one thing he lacks Cleese’s short and borderline-psychopathic fuse – his world ends with a whimper, unlike the ex-Python’s eye-popping bang. As such, he’s less interesting on the whole, a put-upon nebbish, Woody Allen battered by the rigors of an English public-school education and forever stuck in the minor classes. When British Secret Service desk-jockey English’s ineptitude ends with every single one of the queen’s secret agents dead, he’s called in to discover who’s taken off with the recently refurbished Crown Jewels. It turns out (as it so often does) that they’ve been stolen by John Malkovich, who, as mad French prison-magnate Pascal Sauvage, is keen on crowning himself king of England and turning the isle into one big penitentiary, along the lines of John Carpenter’s Escape From Stoke-on-Trent. Aided by former Aussie singer Natalie Imbruglia, as motorbike-mad Lorna Campbell, and right-hand-twit Bough (Miller), English topples from one bizarre cock-up to the next, until, finally, he emerges covered in "poo" from a mammoth toilet. Shades of Mark Renton’s Trainspotting escapades, yes, but Atkinson is no Ewan McGregor – this is strictly dull chuckles from dull wits, and while there are a few genuine laughs to be found amidst the dross, they’re as rare as Francophiles in Crawford, Texas. On the other hand, it’s almost worth the price of admission to see Malkovich’s bizarre, unaccountable turn as the crazed Sauvage. Almost. 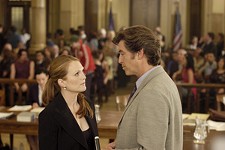 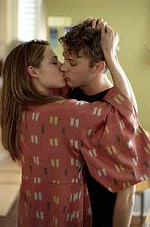 Antitrust
Antitrust has it all -- duplicitous schemers, killer sesame seeds, dead code poets societies, laughably bad CGI mansions -- and then some. The trouble is ...