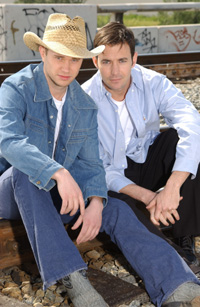 The Trip begins with a police car zipping dramatically along a desert highway. A scorpion skitters along a rock in extreme close-up, and the soundtrack swells. Then writer-director Swain pulls the cinematic equivalent of a Starsky and Hutch 180-degree turn and veers off into the narrative equivalent of a rush-hour clusterfuck on I-35. We stay mired in flashback, honking the horn but moving forward only at a crawl, until the film’s third act. Too bad, really. Much of this well-intentioned indie film – Swain’s debut – is quite likable, even before you get to St. John’s scene-stealing bit as a tippling matron who hasn’t forgotten how she shook a tailfeather as a Vegas chorine many years ago. The cast of unknowns (whose résumés tend toward credits like "masseuse" and "cop at diner") is pleasant and fully invested in their roles. But the structural problems in Swain’s script pull the whole production down. Alan (Sullivan, who has a nice, accessible Ron Livingston quality) meets cute with Tommy (Braun), a gay activist, at a Hollywood party. Alan wants to interview Tommy about the "homosexual" lifestyle for his book, a putatively "objective" (read: right-wing) exposé. But Tommy wants to get serious with Alan, even though Alan’s a cable-knit Republican type with a girlfriend (lovably ditsy Irwin). Despite the odds, the two men begin a relationship that spans decades; stock footage and other devices link their love affair to the genesis and growth of the gay rights movement. But when the inevitable falling-out occurs, will the two find love again – on the road home? Swain takes his time answering that question, but despite the film’s leisurely pace, his characters don’t seem fully fleshed-out. They’re archetypes from the central archives of gay cinema: The Conservative Closet Case meets the Passionate Hot Progressive Activist. Then there’s Arquette, the Hardest Working Gay Man in Show Business, as the swishy, bitchy roommate, who provides comic relief and sass. The problem is simply that all these characters are spread too thin by the story. They’ve got too much to do and only 95 minutes in which to do it. The best part of the film is the wry banter between Sullivan and Braun in the early stages of their courtship. Swain gives Braun some deliciously witty repartee, only to fast-forward ahead 10 years to the next twist in the plot. If the film had allowed them to fall in love in real time, instead of to the drumbeat of history, their relationship would seem immeasurably more nuanced. The pacing of the story does have one distinct upside: The use of period music is effective, and the production design is simply to die for, particularly for a low-budget feature. My notes actually say, "Oh my God, I have to have that clock." One hopes Swain’s next production will demonstrate lessons learned – and that clock, if it’s not too much to ask.