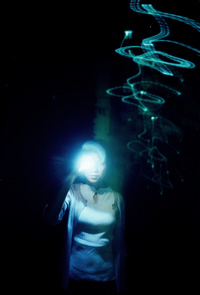 This moody Hong Kong thriller puts a stylish new spin on the old Hands of Orlac horror motif: transplanted body parts causing havoc for their innocent recipients. Here the lucky winner is Mun (Lee Sin-je), a pretty young Chinese woman who has been blind since a childhood accident. But after a successful cornea transplant, she sees "the world with fresh eyes" – eyes that see ghostly wraiths, mysterious hallucinations, and lots of blurry point-of-view shots. A strange young boy appears in the hallway of her apartment building, demanding to know the whereabouts of his report card. A man stands in the middle of a freeway. And her bedroom somehow transforms itself into another place, one with bare wooden walls and strange shadows. Fortunately, she’s also seeing hunky Dr. Lo (Chou), a psychotherapist whose interest in Mun is beyond professional. Is Mun losing her mind? Or is there a more sinister explanation for her visions? If you’d heard nothing about The Eye – except that Tom Cruise is producing an American remake – you could probably connect the dots from here, plotwise. The film, directed by the Thai-born twin Pang brothers, isn’t long on narrative surprises; its conceit is perhaps too familiar, thanks in no small part to The Sixth Sense, which The Eye references frequently. The other caveat is that the film often veers into melodramatic terrain, with the Cantopop "romance" element of many a Hong Kong psychodrama; hardcore horror fans may dislike this aspect, while to others it may just seem like padding. (Certainly, it slows the movie down.) The film’s strength by far is its eerie atmosphere, established with shockingly beautiful images that stick in the mind and innovative yet low-key sound design (by co-director Oxide Pang) that suggests David Lynch at his best. When there is no food at his altar, a "hungry ghost" chews a candle instead. A strange reflection appears – noticed only by the viewer – while Mun and Dr. Lo ride a subway. Throughout it all, cerulean lens gels create an ever-present twilight, and the Pang Brothers play with the plasticity of time, stretching a suspenseful scene in an elevator into nail-biting infinity. The film is never less than lovely and recommends itself easily to audiences who may know what’s going to happen but are fascinated by how. The horrifying ending sequence, which is both gorgeous and truly tragic, is a worthy payoff in any event.