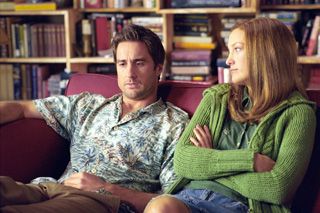 With the recent news that "bling-bling" has made it into the New Oxford Dictionary, I’d like to propose another addition to our lexicon: the Coppola Curse. It’s what happens when a once-fine director slowly chips away at his reputation with lesser films. In Coppola’s case, Jack springs to mind, although it’s taken years of regression therapy to combat that very problem. It happened to Coppola, and now it’s happening to Rob Reiner, whose résumé is chock-a-block with one modern American classic after another: When Harry Met Sally …, Stand by Me, This Is Spinal Tap, The Princess Bride. Of course, any director as prolific as Reiner is allowed to miss the mark every once in a while – which is just what he did with North and The Story of Us. Those were freebies. But Alex & Emma is so off the mark that it lands in an alternate plane of awfulness. A romantic comedy in ad speak alone, Alex & Emma stars Luke Wilson as Alex, a writer and gambling addict who must deliver an entire novel in 30 days in order to pay off some Cuban mafioso. He hires stenographer Emma (Hudson) in order to bang the thing out (the working title of the picture was Loosely Based on a True Love Story, as it is loosely based on Dostoyevsky’s account of falling in love with his typist). As Alex dictates to Emma his novel – a highly autobiographical love story set in the Thirties – the action transposes to the actual novel; the characters in the book are played by their real-life counterparts, and as Alex and Emma grow closer over the course of the month, so do their characters in the novel. If the premise sounds interesting, then I’ve done a disservice to the film, as it is in fact astonishingly dull. The leads have zero chemistry, the supporting actors are even worse, and the script is a lifeless, draggy thing. In our post-game report, my friend and I could recall only one good laugh, but considering the deficit of genuine humor here, that one laugh has an uphill battle, what with a mountain of banality to overcome. Most punch lines can be spotted a mile away, although I certainly wasn’t expecting to hear the line "Hitler had edge" tossed off as a gag (ah, yes, how could I forget the old genocidal-dictator hip factor?). The script (credited to Reiner, Jeremy Leven, Adam Scheinman, and Andrew Scheinman) even goes so far as to pilfer a joke from When Harry Met Sally … – the once-funny line about reading the last page of a book first – and one can only imagine the dearth of imagination and excess of desperation that would drive a filmmaker to sticky-finger from his own work. But what really stumps me is how this dreck ever saw the light of day in its current state of, well, dreckiness. By my count, there are at least two time-honored methods of improving upon this kind of colossal mistake: rewrites and reshoots. Wait, no – I thought of a third: Shelve the sucker, and wait for AFI and Lincoln Center to celebrate your storied career. ’Cause with any more dogs like this, the invite might get lost in the mail.