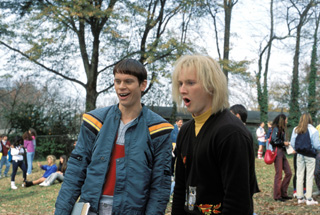 Drowsing through some late-night television the other evening, I stumbled across actor Eugene Levy offering his comments on Dumb and Dumberer (in which he co-stars), and I was struck by how gravely underwhelmed he appeared in his pitch to the viewers: "If you liked the original," he said, "you’ll like this, too. If you didn’t like the original, you’re probably not going to like this. It’s really a very dumb movie." This from a man whose work in Christopher Guest’s past few films (which Levy also co-wrote) – Waiting for Guffman, Best in Show, A Mighty Wind – is a fine example of the phrase "comic genius." Readers of a certain age will recall Levy from his days with the Second City comedy troupe and their own late-night/early-morning lock on televised comedy via SCTV – a comic proving ground that launched the careers not only of Levy, but also John Candy, Harold Ramis, Catherine O’Hara, Martin Short, and other familiar names but that never quite captured the monster market share (or popular attention) of chief rival Saturday Night Live, despite a consistently inspired storyline and some of the most affectionately bizarre characters since the days of Ernie Kovacs. The past is just that, though, and audiences these days likely think of Levy’s paterfamilias turn in the Weitz brothers’ American Pie (and its non-Weitz-directed sequel) … if they think of him much at all. That, too, was "really a very dumb movie," as was the Farrelly brothers’ original Dumb and Dumber back in 1994 (and what is it with sibling directors and dirt-dumb comedy, anyway?). But as Levy seemed to be hinting in his TV spiel, there’s a fine line between dumb and stupid, and Dumb and Dumberer, helmed by Troy Miller, falls firmly toward the latter, face first and flailing. Miller’s credentials are none too shabby, having directed the Fox network’s late, lamented Greg the Bunny series as well as some Tenacious D gigs. But Dumb and Dumberer – a prequel that stars neither Jim Carrey nor Jeff Daniels from the original, but instead two semitalented mimics as high schoolers Lloyd (Olsen) and Harry (Richardson) – is a horrific mess. Olsen gets Carrey’s slaphappy outrageousness down pat – elastic muggery is key – but Richardson fares less well in a fright wig and dental appliance that makes him look like a beaver that’s spent too much time with Phyllis Diller. What rankles most about Dumb and Dumberer isn’t the acting – that’s simply the icing on the poo-cake, as Tom Green would say – but the complete lack of a serviceable script with funny gags and a semblance of comic timing. The plot involves a scheme by conniving principal Levy and lunch-lady cohort Oteri to bilk the school out of its special-ed funds, while Lloyd and Harry get all moony over school-paper reporter Jessica (Nichols) and make with the toilet humor like they’re shilling for American Standard. Poor Levy, reduced to playing a flatly written heavy, has little to do but react to Olsen, who struggles mightily to out-Carrey Carrey. It’s all for naught, though. Even with its scant running time, this nightmarish travesty barrels along with all the whipcord speed and nimble comedic grace of a loved one’s funeral.